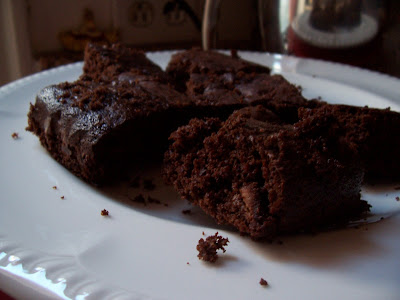 So the brownies kinda start a slippery slope it seems. It didn’t really START with them, but it was the first time I started noticing that maybe I was out of practice. I mean I had a big excuse, well two, to be exact. First, a few years ago I took a very demanding job that had me home late and too tired to cook. Still at that job, so it explains why the only time I have to draft this blog post is on a plane to Los Angeles. Then, I got pregnant, and my eating just wasn’t the same. If I wasn’t grossed out by things like grilled chicken, I was on my OBGYN’s crazy no-protein-left-behind diet, which sadly, omitted a lot of the carbs I so desperately need in my life. Now my little nugget of no-sleep happiness doesn’t give me much time to cook, except in the rare instance when I still have energy after putting him down for the night.

The buzz currently around my Nigellaphites is Nigella Lawson’s new book, Kitchen. In America it’s called Nigella Kitchen, which is pretty redundant, considering Nigella wrote it, but no one at Hyperion asked me, so…. whatevs. The book is massive, and I’m so excited to cook from it. I made the no-fuss fruit tart, which didn’t turn out well, as I blogged, because I got the base all messed up. That was entirely my fault, not Nigella’s or the book, so I persevered.
I went on to make the brownies, which spoke to me – no, seriously, chocolate really does talk to me – that they needed to be made. It is made with just cocoa, no dark chocolate, so it saves a lot of money and time not having to chop up lots of expensive chocolate. You do have the option of adding chopped up milk chocolate at the end of this recipe, but that is much easier, and since I love milk chocolate, I’ll forgive it for taking away precious moments from my life.
I made these the first time my baby turned 6 months. I had a mini-half birthday for him, and the brownies were definitely overcooked. I took them out about 20 minutes after they went into the oven, which is the minimum time in the book, but they were still overdone. Hey, chocolate is chocolate, so we still ate them (read, I still ate them) and they were good, but they missed the crispy top/fudgy bottom we all know and love. So I had to make them again – and they were a success! Rich and fudgy. Even after 15 minutes they were almost cooked through, so next time I will dare to do 12 minutes and let it continue baking outside the oven in its own heat. I also seriously do not recommend using foil. It just sticks to the bottom of the brownies. I just buttered the bottom of the brownie pan and added parchment paper to it so it stuck, and that was the perfect vehicle for these brown beauties.