I never knew when it happened, but I became a die-hard bread baking fiend. Anything that involves flour, yeast, a soft rise, that bit of a sour note in the air -- bread baking, it makes me just so happy. I love trying new recipes - and when I saw an interesting one in the King Arthur Flour catalogue I got the other day -- I just had to give it a go. The bread requires a slow rise overnight -- and I love bread like this, because it means that I could start baking in the morning, and have a lovely piece of bread for lunch.

It is a fairly simple recipe. I get scared by 'no-knead' breads, because they tend to be too sticky to manage, but with a little more flour added than stated in the recipe, it was easier to handle. I didn't have golden raisins (sultanas) nor wanted walnuts, so I decided to just use the cranberries, which I love.

The slow rise overnight makes the dough a massive sight in the morning. 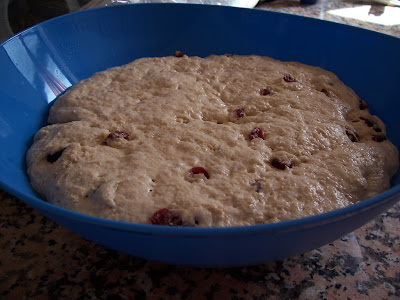 The recipe calls for the bread being baked in a ceramic long container -- the only real problem I have with the recipes in the catalogue is that they don't really give you an option of what to do if you weren't to buy their products. Are we really established bakers if we have a cabinet full of items we'll use maybe once, twice? I don't think so. Obviously, I see KA's point. If they're going to spend money producing a catalogue and spending time testing a recipe, they're going to want some customers out of it. But, I don't want to buy this ceramic crock thing, and I still want to make the recipe. Maybe a few years ago, I would have seen the pictures of the bread, said, 'oh, that's pretty', then seen what I needed to make the bread, and then moved on, never trying it, no matter how good it could have been. I'm not like that anymore. I made the bread, despite not having that ceramic thingamajig.

So after twenty minutes in the hot oven, I lowered the temp to 375F. I continued baking it for another 25 minutes. And that was it. 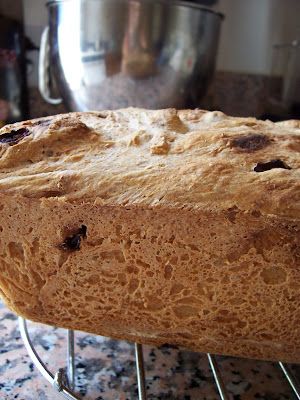 Turned out perfect. I made a lackluster chicken salad to go with it, but it really doesn't need anything more than deli-fresh turkey breast, some mayo, maybe a tomato or two. Really, really good bread!

That looks so good Ilana , and it just goes to show how much confidence you have baking it anyway without the thingymajig!
xx

That looks gorgeous Ilana, I love making bread too, hardly ever buy it now.

Ilana, would it work to bake it in a circular pot with a lid _ ceramic or cast iron _ like I do with the Bitman no-knead recipe? I can't think why not.