She gets too hungry, for dinner at eight 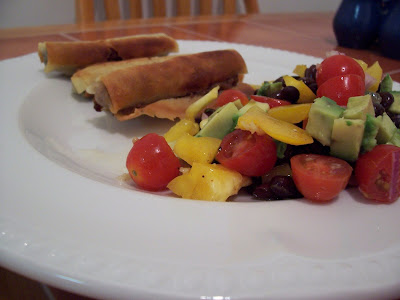 Because of the job I have now, I don't get home until 7 or later. After working at a place where the latest I would get home was 5, this was a rude awakening. When on Earth am I supposed to eat dinner! LOL.

I've started to think of ways of eating fast as soon as I got home. I was inspired by a recipe I saw on the Food Network the other day -- Ina Garten's Guacamole Salad. I have to add my admission here. I don't like Ina Garten, I just don't! I'm sorry, but I don't get what is so great about her. She is infuriating! But... she has a good reputation when it comes to her recipes, and I am an eater first and foremost. So, last night, I made her salad.

It couldn't be simpler. A sort of deconstructed bean dip and guacamole. Grape tomatoes, yellow pepper, red onion, black beans and lime zest all mixed together. A dressing of olive oil, lime juice, salt, pepper and cayenne pepper is made. This is added to the vegetables, and then the avocado is added at the last point before serving.

After work, I got off the train and straight into the supermarket. I love my new neighborhood! I got all the ingredients I needed except they didn't have limes (!!!) so I got lemons. To the non-foodie, I'm sure they would interchange limes and lemons. As a foodie, however, I see a vast difference so I had a problem deciding to make this last minute change. But I did it anyway.

And as an aside, I totally get the whole The Devil Wears Prada scene where an actress says how two green belts are 'so different', to which Anne Hathaway's character sniggers at, and to which Meryl Streep's character retorted with a compelling speech about the importance of fashion in our lives. She was awesome! That movie had a really strange effect on me. I kept feeling like I should go out and spend $200 on a cashmere sweater in J. Crew. Ok, so back to food... It's cheaper.

So dinner was totally delicious! The right mix of flavors, and the plate looked so beautiful with all those colors. I paired it with some spicy Moroccan cigars I got at the store. YUM! Fast food, before eight o'clock!

Yeah, it´s not fun at all to home that late...I´ve done it for three years and now I´he resigned! I´ll be working 50 % only, otherwise you feel like you don´t have a life. Hope you find something else SOOOOOOOOOOON!

I sympathise, I used to do a job where I got home between 6.30 and 7 three nights a week.

Oh the hunger - and lack of energy to cook! On the bright side Nigella Express sounds like a fab book for you :)