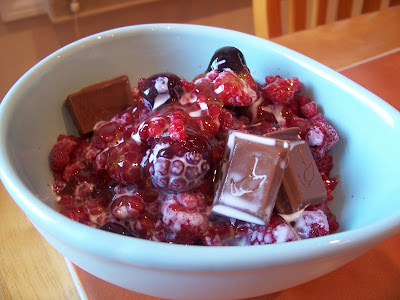 It's sweltering here. I quite smugly told my sister via the Web last night that we are doing just A-OK without a fan or air conditioning -- that sleeping with the windows open has been like a dream with the cool breezes coming through. That was until tonight. SO HOT!

After a very nice dinner of pasta (homemade sauce, uh thank you), I really really wanted something cold and something sweet. A few days ago, the ice cream truck stopped right in front of our house! This is a BIG deal. Growing up, we lived on the 5th floor, so when we heard the ice cream truck song, we would run down the five flights of stairs (see, taking the elevator was a risk -- what if the ice cream man drove away by then?), and then have to compete for the front of the line with about fifteen other neighborhood kids. Ever seen Brooklyn kids with the look of sheer determination in being the first to get ice cream in their eyes?! Not pretty!

Eddie Murphy did a really funny skit about this a long time ago.

Then, as an adult, when I lived with Rafa in our one-bedroom near Avenue U, the ice cream truck never drove by. Not fair.

Getting ice cream is always a challenge for me. I can't ever decide between Good Humor Strawberry Shortcake or Toasted Almond. Both are delicious, equally, but as soon as I choose one over the other, I instantly start regretting my decision after the first bite. And come to think of it, they're not that healthy either. That's the thing about being a soon thirty-year old. I still think like a kid but have the metabolism of an adult. If I eat one of those I pack on about 5 lbs. If I think about one, then at least 2 lbs. right there.

So I'm trying to be good. I've come up with my own cool "ice cream" concoction, for those nights when you really really want an ice cream but there is not one to be found.

"Ice Cream" When You Want to Be Bad, But Still Being Good

About 1 cup frozen mixed berries (fruits of the forest, if you were)
2 tbsp light (single) cream
2 tbsp (or more) honey
block (or two) of chocolate of choice (if you're feeling extra bad)

In your snazzy ice cream bowl that Mr. Softee can't compete with, plunk in the still frozen berries. Drizzle on the cream and honey. Add a block or two of your favorite chocolate. Let sit until partially frozen/partially thawed, and the cream is colored by the berries. Enjoy!

Hee hee, being good with cream in the ice cream? ;P Why don´t you please come up with a yogurt version, so that I can try it when I wnat to be a good bad-girl?:)