Heart of the Matter

I'm feeling quite bummed that my sister and my nephew are on their way to Israel tonight because I'm going to miss them a lot. I felt like making some more finicky things in the kitchen, to take my mind off of it.

And I was also keen to use my artichokes -- and learn how exactly to use them too. Articles that I have read online talked about getting to the core of the artichoke -- the heart. They weren't entirely clear about how much should be peeled away, though. I peeled and peeled and hoped that I had the artichoke's heart. 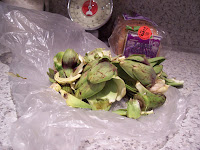 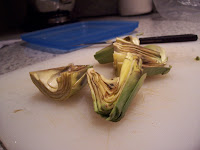 Telling myself I should just for it, I decided on a recipe too; Artichoke Rice Cakes with Manchego. This recipe comes from a book I haven't used up until now, and that was given to me by my sister a while ago; The Complete Spanish Cookbook by Pepita Aris. The recipes in the book look really good, but I have to laugh a bit at the author's first name... 'Pumpkin seed' wouldn't be my first choice for a girl's name, but I'm not entirely sure that is the meaning of it in Spain anyway. :) 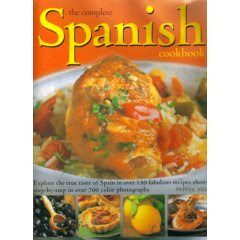 The rice cakes are described as an unusual type of croqueta with artichokes and paella rice as the base, and manchego pieces in the center. I don't have manchego, and I don't really like it, but I subbed it with pieces of parmesan cheese instead.

The rice part was actually a lot like risotto, and the 'rice cakes' seemed to me to be a Spanish version of arancini. I've never made a risotto out of paella rice (calasparra), and I found that they needed a lot less liquid to get cooked. Once the rice mixture was allowed to cool and then chill in the fridge, it was possible to form them into cakes that were ready for frying.

A little piece of parmesan went into the center of the cake, and then they were dipped into cornmeal. The recipe stipulates fine cornmeal, and on further inspection, I saw that I actually had coarse cornmeal. I knew then the cakes would be crunchy, but I had come too far already and thought I might as well continue.

Frying the cakes was a bit of a bother with hot olive oil spluttering around, and the cakes weren't held that well together by the cornmeal. I think a finer cornmeal would have definitely worked better. In the end, I had a few presentable cakes to photograph and eat. And they didn't taste half bad either! 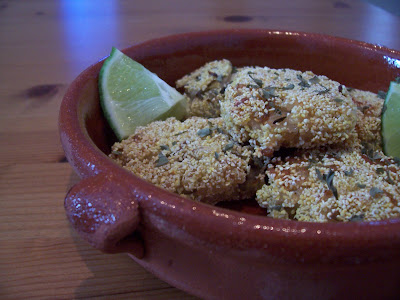 I had a bit of rice mixture left, so I decided to bread the cakes and freeze them for future snacking. This time, I decided to use panko crumbs, because I felt that they would hold the mixture a bit better. I stuck the breaded cakes in the freezer, and once they are cold enough, I'll pop them all in a freezer bag. I love having a stocked freezer. And I love that I experimented with a new vegetable I've never cooked before. I wonder what my next experiment will be!

Your little cakes are so cute, if only you lived closer so I could taste one too :)