Summer came quite unexpectedly on us... Well it's been OK weather for a while, but it got really hot starting in the middle of last week. Today is yet another sunny, warm day. It's odd to say but when it gets really hazy, really balmy, all I have is pasta on the brain. But not the pasta that comes with heavy vegetable and cream sauces. Instead, pasta the way Italians would eat it. Full of flavor, low on ingredients. The freshest things around, put together. 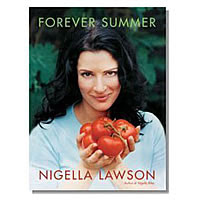 I opened up Forever Summer for the first time in a long time today. I love Nigella's descriptions of sitting out on her patio on warm nights, eating a fiery bowl of pasta.

I love most of the pasta chapter in FS; I think my favorite recipe is Spaghettini al Sugo Crudo, roughly translated as spaghetti with a raw sauce -- the raw part being the tomatoes and garlic.

To make the sauce, you need to blanch, peel and deseed some really good tomatoes. I still had some beautiful plum tomatoes hanging about so decided to use those.

I've made this recipe a few times, and always the shortcut of just chopping the tomatoes finely instead of blanching them first. I had a lot of time today, and the kitchen was cool in the morning, so I decided to go the whole nine yards with this recipe.

After chopping up the deseeded tomatoes finely, you add extra virgin (or as Nigella says, 'voygin') olive oil, a bruised garlic clove, sugar, sea salt and pepper. The tomatoes are left to souse for a good few hours.

Then, you just dress some cooked spaghettini (or spaghetti, as in my case) with the sauce. Delicious. I do find often that I have a lot of liquid to accompany the tomatoes, so I think I'll just use less oil next time, or do as I have done today, and reserved a lot of the liquid for some other tasty recipe.

I have to emphasize though on the loveliness of this dish. It's really really really good. Just what I needed to start this summer off right. It's funny because the last few days I have had this idea floating around in my head of a recipe I wanted to try with a similar tomato sauce. Now, thinking about it, I don't know where this recipe is and when it came into my head, but Nigella's recipe is just about the best thing I could have eaten right now. 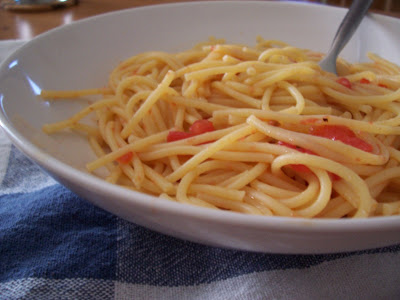 Here is the recipe, if you're interested. Thanks to Lushlife for posting it on her blog.

Blanch the tomatoes in some boiling water and leave to sit for a few minutes. Drain, then peel away the skin. Halve the tomatoes, and deseed. Cut out the cores, then chop the remaining flesh finely. (I used the mezzaluna.) Put them in a bowl, add the sugar with some sea salt and freshly ground black pepper. Bruise the garlic with the flat edge of a knife. Peel, then add the smashed clove and the oil to the tomatoes. Beat with a little whisk to make everything come together as a sauce. Cover with cling wrap and leave at room temperature for 30 minutes to 8 hours. (I left them about 4 or 5 hours.) Cook the pasta in a large saucepan of boiling salted water - drain. Remove the garlic clove and discard OR NOT (I didn't)- toss the tomato mixture into the hot spaghettini. Work the sauce through the pasta, so that is evenly coated, and serve immediately.

Mmm, that looks good Ilana, I like the plain ones and the creamy ones too ;) I've not tried this one, but have done the cooked one in FS and it was lovely.

So because of you Ilana I made this today and I loved it. A new favorite that's for sure. Thank you for posting. I also made the Bitter Orange Ice Cream. It taste like a creamcicle to me.