Needs To Be Documented 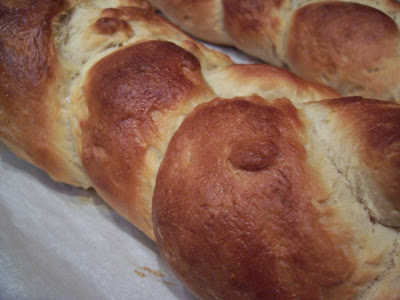 One of the things I love to make the most since picking up my baking bug a few years ago is challah. For those that don't know it, challah is a bread traditionally eaten on the Jewish Sabbath, and on other Jewish happenings. It is a wonderful, slightly sweet bread, yellow with the addition of oil and eggs. Challah has the reputation of being a great vehicle for french toast, but I love it as it is, warm from the oven, with melted salty butter on top.

Even though I've made it a few times, and even mentioned it here and my other blog I never really documented how I made it, and I don't even think I've included a picture of it here. You can see my attempt at it this morning, and here is how I made it:

The King Arthur Flour Baker's Companion is a massive book, and chock full of amazing baking recipes. I turn to King Arthur for bread recipes, and always make my challah using its recipe. 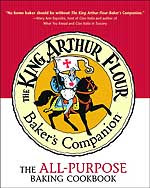 I won't lie to you and say making challah is not a lengthy process. I could understand why some people would feel inclined to not make it at all... But if you're in the least bit curious what it's like, I think giving it a go is definitely worth it... especially if you're not around any good Kosher bakery. And that being said, challah is best very soon after baking, so even kosher bakeries have awful and stale challahs. Those are a crime against humanity, only to be destined for french toast!

Even though the process is long, don't confuse it with being difficult; it's not. Nigella said recently on one her shows that people confuse difficulty with the length of a recipe. I clocked my process of making challah from start to finish this morning; it took approximately 4 hours. So, if the weather outside leaves something to be desired, and you don't have anything to do other than house errands like the laundry, dishes, etc., like I did today, then make this. It is well worth the effort.

So, first, you begin with the appropriately named starter. (pictured below, left) This is equal parts of water and flour (one cup of each), and two teaspoons of dried yeast. It is left to sit and froth for about 45 minutes.

Then, the remaining flour is added, along with sugar, vegetable oil (or butter), salt, two eggs, and one egg yolk (with egg white reserved for the wash). This is all kneaded together to give a soft, and lovely, if I may add, dough. (pictured right, below) 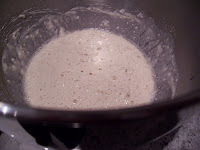 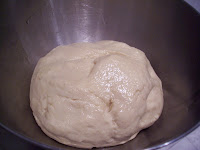 The dough is allowed to proof for an hour and a half in a warm place. And then, the dough is divided into three, and then braided, before being washed in a mixture of the egg white, 1 teaspoon of sugar and 1 tablespoon of water. 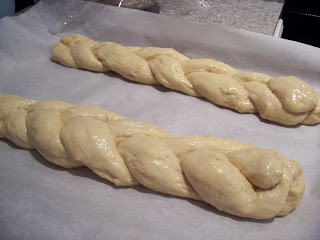 I often make two loaves out of this mixture, just for preference. So, I divide the proofed dough into two, and each into three, to make two three-braided loaves, as above.

After the loaves are brushed with the egg wash, they are left to proof again, for another hour or so, under some lightly oiled clingfilm. And then, they go into the oven. Baked until golden and lovely. 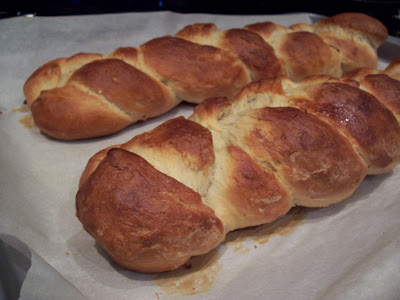 Minimum effort, and unbelievable pleasure. I am taking these two tonight for one of my mom's dinners. A celebratory bread befitting a feast.

The loaves look amazing - I can smell them now!

Ilana - Wow, you and Freya must be on the same track, for she just made some too. It is funny how people get the impulse to make the same thing at the same time. It makes others - like me - feel like they are a out of the loop! Your result is fantastic. I love looking at the threads on the crust, how it is suspended in action, pulling away. And what a wonderful toasty-colored crust.

YUM! I love challah bread so should really try to make some. These look amazing.

p.s - will you be back in NY in September? I'd love to meet up when we're there on holiday.