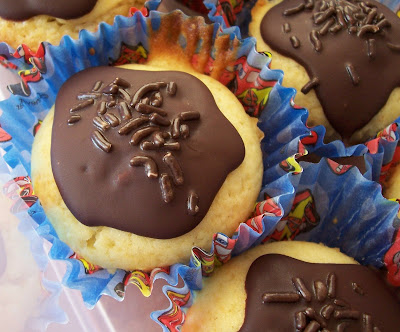 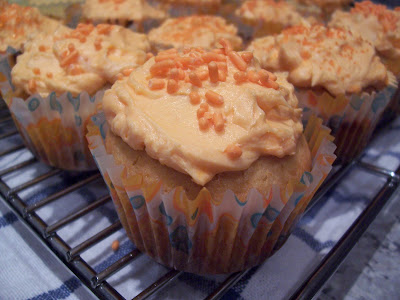 I think I have said this before, but I'm a big kid at heart. While my intellectual and sophisticated foodie friends are making pavlova and experimenting with pastry and bain maries, I am wondering how to get the best cupcake. I love cupcakes. And not just because they are 'in' now, or were, a few years ago, but because it is everything about childhood that I remember and wish I had more often. Back in those days, my mom hardly baked. After years in pastry school, she kind of gave up on the whole thing, feeling like it became a chore after a while. So most of our younger years, and into teenagedom and young adulthood, we never really had sweet things in the house. I got to eat cupcakes very rarely; at school functions where the Nigella Lawsons, the stay-at-home moms, would bring cupcakes to bake sales, their child's birthday parties. My favorite was chocolate and the icing had to be white. I know now, don't ask me how, that they were probably from a packet mix, at least the icing. See, that was another thing we almost never got at my home. Things out of a packet. There was a time though that I got my mom all excited about Rice 'a' Roni, The San Francisco Treat, but that kind of passed.

So, back to the cupcakes. Now that I'm a sort of domestic goddess in training, I try to make cupcakes whenever an opportunity presents itself. My sister was having a garage sale last weekend and I thought how fun it'd be to give out cupcakes to customers. I decided on two different cupcakes, for variety, you see. Both cupcakes had the Fairy Cake base from How to Eat. This is the best base I have found for fairy cakes. It always comes out so light and with hints of vanilla. Mmmmmm. I also use vanilla sugar in this recipe. So good.

The icing was going to be homemade too, because I figured, if I'm making cupcakes, might as well make the icing from scratch too, and it's not exactly difficult. The buttercream icing (the orange cupcakes above) was from a recipe I got online. I can't seem to find it now, but it was nothing more difficult than beating butter, icing sugar, vanilla and a bit of cream. I colored the icing orange using one of those gels Nigella recommends so the icing doesn't get watery. I ended up coloring my hands too quite a bit, but thank god it didn't stick to my fingers for good.

The second cupcakes were inspired by the Harry Potter: Chamber of Secrets movie. I've seen this movie countless times, especially since they show it on network TV every weekend, it seems. 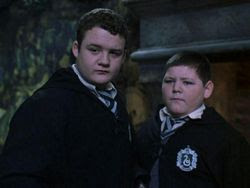 Harry and Ron were trying to make Crabbe and Goyle pass out from special cupcakes, so that they could take some hairs from them, and then turn into them temporarily to get some info out of Draco Malfoy.

These cupcakes have always intrigued; floating in the air, covered in chocolate ganache and matching sprinkles, being demolished by the dumb and dumber Crabbe and Goyle.

They looked easy enough to recreate. Bake a fairy cake base. Top with thick-ish chocolate ganache; thick enough that you could top enough of the cupcake to still see the golden base beneath. Before the ganache sets and becomes hard, top with chocolate sprinkles right in the middle.

I think mine turned out well!!! The cupcakes were well received by garage sale buyers. You have no idea how much money people will pay for junk! I'm thinking of having one every weekend to put my future kids through college! The Russians were quite suspicious of the cupcakes. They are used to paying 50 cents for the most ugly, god-awful leopard print shawl, with tassels! But they are not used to people giving them food for free. They're probably thinking, 'must be an American thing!' {Working out my self-hating Russian issues really requires a blog onto itself! LOL} The Americans turned down cupcakes because all of them apparently were watching their sugar. {Working out my self-hating American issues requires an even bigger blog, but at least it's cheaper than therapy!}

Well, I managed to be a complete pig eating more than my fair share of cupcakes, but we still managed to give quite a few to keen customers, so there. So on to my next cupcake making escapades!

Both cupcakes look great, I especailly like the second ones. :)

These look yummy Ilana, I love cupcakes. On an aside I am so excited about this summer's Harry Potter book and film offerings!

I am seriously drooling now.....