I love the holidays because with it comes the promise of sharing time with those closest to me. For a while, my mother would host a meal on Saturday night for her daughters and our husbands, but it's not something we do all that often. So, holidays are a great chance to get together again.

I know I am biased beyond belief but my mother is the best cook on this plant! Everything she makes never fails to be absolutely delicious. And not just pretty good, I mean, delicious!

For Passover, she cooked up the usual suspects -- chicken soup with matza balls, zharkoy (a meaty stew with garlic, potatoes and mushrooms), gefilte fish, and the thousand salads she usually makes for family gatherings.

I took part in helping out too, making the matza latkes. 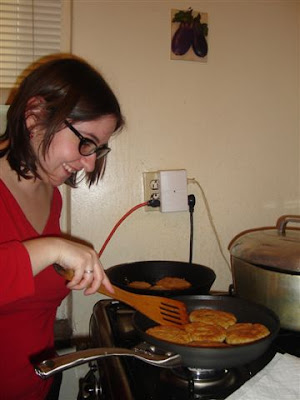 They turned out OK, but not as good as my mom's. I think, and she thinks, it's because I didn't add enough water to the mix, making them harder than usual. Oh well...

My mom also made an UNBELIEVABLE cheesecake from Israeli 9% white cheese. She topped it with a light whipped cream. Divine!

On Monday, Rafa couldn't join us for the festivites since he was working, so we came over for Passover dinner #2 on Tuesday. And on Wednesday, our 4th wedding anniversary, we had the leftovers for lunch. 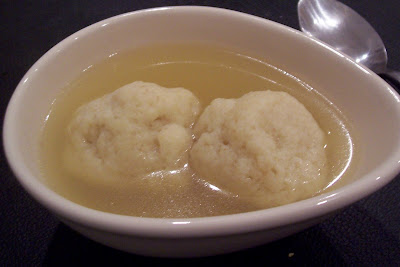 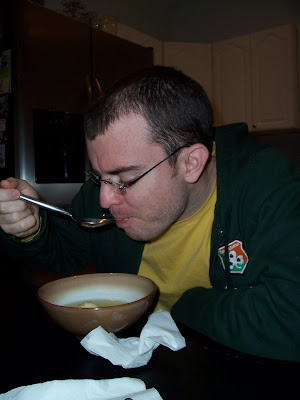 Eating his Jewish penicillin like any good Christian boy should! 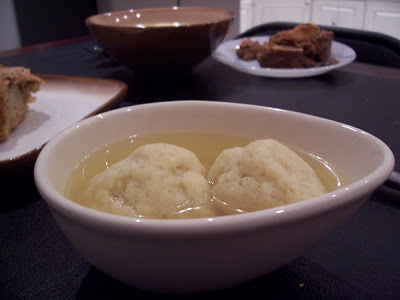 My fabulous Israeli friend, Francesca, was also so kind to send me some Passover gifts in the mail! I loved absolutely everything she included, but especially the card (pictured above) as it brings back a flood of memories for me. Israeli greeting cards, you see, are known for their glitter and beautiful and intricate decoration. These are the before-Papyrus and Kate's Paperie days so popular now in the States. As a kid, I would go into the town center around the Jewish New Year (Rosh Hashana) and Hanukah, and there would be vendors of these gorgeous cards. Years later, when living in New York, my grandmother, who still lived in Israel, would send us these cards. I always have had a soft stop for Baba Leeza. She, my mother's mom, took care of me when I was a little munchkin in Israel. Even though it has been many years now that she is gone, I can still remember her hands, her white, long hair, her perfume, her dresses. We used to watch the Lakers on TV, even in Israel, and I remember when I visited when I was 10, she bought me a pale yellow outfit (top and ruffled skirt) in one of the stores is Kiryat Nordau. On another day during that summer, I remember the exact spot where I was in one of my moods and she, thinking that she was the reason for my sullen face, asked if I was angry ('brogez') with her. I don't know what my answer was to her then, but thinking about it now, it pains me to think I ever took her for granted. She died a year later, but I never got to say goodbye.

I'm sure Francesca would never have known that by sending a simple card what a flood gate of emotion would follow. The best things in life, I find, are in the details. That is why, even if my parents drive me crazy, I still look forward to those times when we could all be together. That's what holidays are for, and really, should be part of the everyday.

That's so nice you got some family time, Ilana. I never got to cook with my Mum so am very envious of that.

That card is fantastic!
This post made me all warm and cosy inside, thanks!

The card is so pretty!

How nice that you had a happy Passover filled with good memories, both present and past!

Also, does your mom fancy adopting me??