Weekends for me aren't usually ambitious. I know myself enough to know that if I do make a whole lot of plans, I hardly ever follow through with most of them. So, I figure, make no plans, and what I do end up doing in turn makes me look productive.

I didn't motivate myself to make anything substantial to eat on Saturday, so I thought on Sunday, I could remedy that. Rafa is doing a 4-night shift at work, so the whole weekend he has been sleeping. I took the quiet in the house as an opportunity to make us lunch today. I didn't have anything specific in mind, but did take out boneless chicken thighs to defrost. This is the first time I am using boneless, skinless thighs, so I was interested to see how they would turn out. I thought a nice marinade would do, so decided on Nigella's sage and onion marinade that is a favorite of many. I love this particular dish; the house, undoubtedly, always smells just wonderful while this is baking. Since I wasn't marinading the chicken overnight, I left them in the marinade at room temperature. Just before, I was about to bake the chicken, I added some chopped up red potatoes too into the pan. They fit snugly in with the chicken and the rest of the ingredients of the lovely 'ointment'.

An hour later, lunch was done! I have to say, this was DELICIOUS! I have made this dish using different cuts of chicken, also sometimes boned and skinned, and this is the best version of the dish I have ever made. I don't really like eating meat on the bone with a skin on because since I don't eat the skin, I find the chicken tasteless because all the flavor is left behind. But since these thighs were boneless and skinless, all the flavor was right there. The potatoes also turned out amazingly well -- they really benefited by cooking in the marinade along with the chicken. I will definitely do this dish again, even when I'm not feeling so lazy!

After Rafa left for work, I was feeling super bored. After doing a load of laundry, I was in the mood for baking... not so much for eating but just for the desire to bake something sweet. I decided on brownies, Nigella's snow-flecked ones, specifically. I didn't have white chocolate buttons, but decided on making half of the quantity of the dark chocolate my stash of Green & Blacks dark chocolate with a mint center. So, instead of using all bittersweet chocolate, I used half bittersweet and half mint chocolate. I wasn't sure if the mintiness would come out in the final result, but I had nothing to lose really. The brownies came out FAB! So minty, so good! 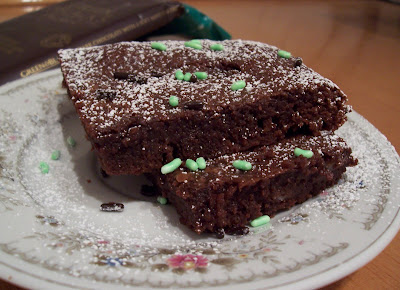 I realize that this would probably end up being a science experiment for me, because these brownies are so rich, I could only manage one or two at a time, and plus, I'm not supposed to be eating anything with flour starting tomorrow night because of Passover... so I hope Rafa likes brownies!!

They look so yummy :) I would love them, it's wierd I was looking at a recipe for mint brownies last night, have just ordered mint patties for them :)

I hope you had a great Holiday Ilana! And you are so right, the best things in life are in the details.