In the interest of research....

It's one of those nights. Grey's Anatomy is a repeat. I'm not really in the mood to cook dinner. A load of laundry is almost done. And it's only 7pm!

The first I have been meaning to make for a while now - Nigella's Lemon Ice Cream from How to Eat. I wanted to make it for ages as soon as I realized there was no cooking custard required. Capital! I am afraid of custard, and I'm not ready to bite that bullet yet.

It's a really easy recipe -- just mix up icing sugar with lemon juice and zest. Then, add it to some whipped heavy cream. Simple. I thirded the recipe because I only had one lemon, so it didn't make a lot, but if we end up not liking the ice cream for whatever reason, at least we won't have tons of leftovers. It did taste a tad bit tart before I put it in the freezer, but not a tragic case.

While I was on my ice cream making (and no custard!) roll, I decided I finally need to use up the coconut milk in my fridge. All the coconut ice creams I had googled over the last week included a cooked custard. I said, 'phooey, there must be some way to make coconut ice cream without the custard!', so I turned to an old favorite recipe for ice cream, Tessa's maple vanilla ice cream. This one is basically a mixture of vanilla, maple syrup, light cream and milk. I have found this ice cream to be difficult to scoop into gorgeous glossy balls, and I think that is due to the fact that it doesn't have eggs (i.e. fat) to bind it well. So, I thought the next best thing would be to fatten this ice cream as much as possible. So instead of the light cream, I used heavy cream. I subbed the milk with the coconut milk -- I had exactly the amount I needed too! I know it's weird to think of coconuts with maple syrup, but really, I think the maple syrup acts as the sweet factor, even in Tessa's recipe. I've also used golden syrup in the past for the original recipe -- sweeter but definitely delicious. The possibilities are endless when you refuse to cook up eggs on the stove!

Well both ice creams are ripening as I type this -- so the results will be tested tomorrow. But, I had to sneak a taste of my coconut ice cream, the part that was left in the ice cream maker bowl. 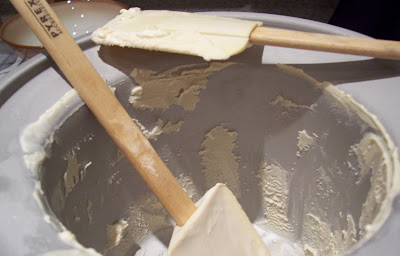 As you could see, I double spooned it. Had to get every last bit. This was GOOD! Definitely coconuty, very much like the coconut ice cream I can't ever remember the name of in Italian restaurants -- I want to say tartufo?, tartuno?, tortoni? It had the right amount of sweetness, and I can't wait till we dig in tomorrow. The best part of these ice creams -- they are okay to eat for Passover, yay!

This holiday is never easy for me. I am a carboholic. No bread, no pasta, no rice, you kiddin'?! Last night we went to an Italian restaurant for our anniversary. That was torture! Rafa looked so happy dipping the lovely bread into the olive oil/balsamic vinegar bowl on our table... and his main course was completely breaded!!! I don't know how people on Atkins do it, I really don't!

So, soon I'll report how the ice creams tasted!

Looking forward to hearing how they turn out :)