I have to admit that the kiddie chapters in books really appeal to me because it is the kind of food I crave. As a child, I ate 'adult' food all the time, and I think it must have affected me up until adulthood because I have always been a picky eater. In my mind, I had visions of other kids going to eat Chicken McNuggets every Friday for dinner with their family. Maybe I watched too many episodes of Family Ties as a kid, because I know that couldn't have been the case. So now, when I see fun recipes for kids, I actually salivate thinking of making them.

I also have to confess here I am not a big veggie eater. It's not that I don't like them. It's just that, well, I can't think of interesting things to do with them. Unless vegetables are a main focus of the meal, I hardly bother with veggie side dishes. So, I don't get my 5 a day, as I should.

The best way to combine a kiddie recipe with a veggie one, for me, was to make Nigella's Greencakes from How to Eat. It is basically her salmon fishcakes recipe, but with broccoli and peas instead of the salmon. I've made this before with peas, carrots and corn. This time, I decided to do the proper veggie version.

This recipe is a great way to use leftover mashed potato and veggies. I never have leftovers when it comes to mash, and we already know my issues with keeping veggies in the house. So, first I got out the green, courtesy of my freezer. Frozen veggies are the best thing since sliced bread! 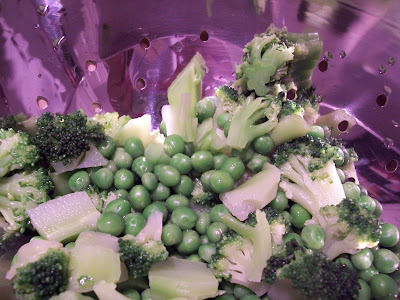 I boiled these till they were just tender in some salted water. Then, I made some mashed potatoes from scratch. I roughly pureed the cooked vegetables and mixed them with the mash. After adding some paprika, parmesan and half of a beaten egg, these greencakes were good to go. And then I realized the mixture was a bit too soft for frying. I think it has to do with the fact I didn't let my ingredients cool down completely. I added some flour to the mixture and let it sit in the freezer for a few minutes. And then I got impatient, so I took them out of the freezer. I have the appetite of a kid, and the patience of one too! I tried not to be too aggressive while rolling the mixtures in flour, egg and then matzo meal.

While the patties went back into the freezer, I heated up some olive oil with a smashed garlic clove, for added flavor. The frying went pretty well even though the mixture got soft again. But, all turned out well in the end. I served it with some sweet chilli sauce. 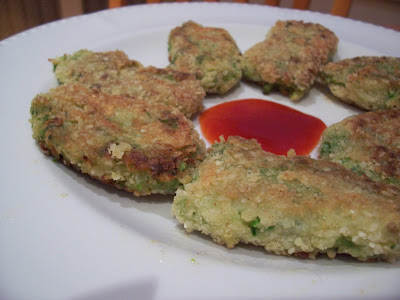 This was really good! It could have done with some more salt, but that's my fault for not salting the veggies enough. I have some mixture left in the fridge, so I'll add salt to that, and make some more greencakes soon.

I must have a look at them for my little one, and us too, we really love veggies. I once met a friend in the supermarket, and she looked in my trolley raised her eyebrows and said 'I didn't know you were vegetarian!' She obvioulsy thought I was buying too many vegetables :)

I love vegetables, in fact - my problem in winter is eating enough fruit! I do usually eat masses of veg in different forms. They look delicious.

Well done you, it's so important to incorporate plenty of veggies into the diet and these cakes look delicious.

I'm ok with eating veggies but am not a big fruit eater which I am pretty ashamed about! I've been meaning to try these since seeing a repeat of the show when Nigella makes them.

What a tasty looking way of getting your 5-a-day in Ilana!!