Gluttony at the Weekend

I was a pig this past weekend. There is no two ways about it, an absolute oinker. All weekend I had this feeling like I was swimming upstream, in a river of chocolate and sugar and butter. As soon as one meal ended, another one came, and then the eating commenced. It was a weekend of celebrations, so it's not like I had any choice in the matter, LOL.

Friday: It was my mom's birthday, plus we were celebrating my dad's birthday from the day before. We went to a Chinese buffet restaurant. That's our thing. I don't know what it is about my family, but I think living in Communist Russia for a few years has affected the way they see abundance. The concent of all-you-can-eat is my father's dream come true. I don't think there is anything else on Earth that makes him happier.

I proceeded to fill my plate with anything shrimp-like or deep fried and battered, or all of the above. A real oinker, I said. (Did I also mention that on Thursday night, our family ordered in Chinese too? I had Shrimp Chow Fun and more fried chicken wings than I would care to admit.)

I didn't have dessert at the buffet restaurant, though, because we were all heading back to my place for dessert. We had my cousins from Long Island over plus my aunt and uncle, who are visiting from Israel, so there was a huge spread. My mom made a chocolate cake from one of her food forums. The culinary equivalent of a drag queen. Russian cakes are just gaudy; I have no other words to describe it. I think this one was called 'Drunken Cherries'. Everything but the kitchen sink goes into Russian cakes. I think that is the reason why I have rebelled so much against my Russian heritage, especially New York Russian heritage. Everything is more, more, more. More cream, more meringue, more furs, more makeup. I am a simple gal. And actually so is my family, but when it comes to my mom and cakes, well she likes to pile it on. On a simpler note, I made Nigella's fabulous chocolate rugelach. The verdict is in: these ARE the most fabulous cookies in the world. We also had chocolate covered strawberries, various chocolates, and about three batches of the infamous Purim cookies, 'ozney haman'. They were, as they always are, fantastic!!

Saturday: What started out as a non-gluttonous day quickly turned out to be anything but. I should have known when I started finishing off the last of the rugelach. Then, we had some things to take care of near our old apartment, and dinner was approaching, so we decided to sit at our old pizzeria, Trio, and get a pie all to ourselves. Our great-pizza-pie search has not been successful since moving into our new digs. We've sampled a few pies, and I have to admit, they were pretty much crap! So we just took the easy way out and went back to a place we knew we loved. When we came home, I made ice cream -- Tessa Kiros' maple syrup ice cream, but this time I added uncooked chocolate hazelnut cookie dough.

Sunday: Breakfast was heavenly. We are hardly ever home together on weekend mornings, so I made pancakes! I used Nigella's recipe from Nigella Bites because I never used it before, and besides, it is a book I don't use as much as I should. 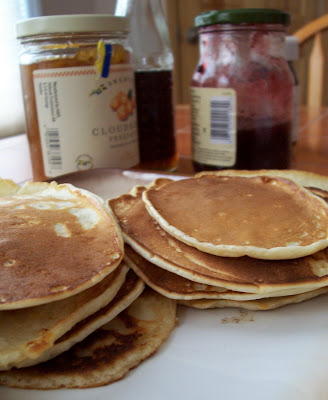 As you can see from the picture, I put out a myriad of toppings -- cloudberry and lingonberry jams, maple syrup, Nutella. The pancakes are so unbelievably light; fantastic!!! First I had a few with lingonberry jam. Then, I smeared lots of Nutella on three of them and rolled them like a cigar - mmmmmmmmmmm.

A couple of hours later -- lunch!!! I made my friend's recipe for 'spicy wings'. They are unbelievable! I just need to post the recipe here!

Cut wing tips from wings and discard (save for stock if you like). Cut remaining wing into two at joint. Whisk together remaining ingredients in a large bowl. Add wings to bowl and toss well to coat in sauce mixture. Refrigerate until ready to use. (I marinated them for just over 24 hours). These do work well without any marination. Preheat oven to 220 degrees C. Place wings in a tray or trays in a single layer. Cook in oven, centre shelf, for about 25 minutes. Turn wings over and cook for another 15 - 20 minutes or until they are well caramelised. Leave to rest for about 10 minutes before serving. 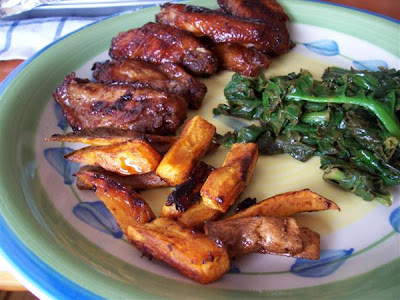 I served this with unbelievably good sweet potato 'fries'. They were actually baked alongside the chicken -- so for about 40 minutes, and were first coated in olive oil and smoked paprka. The spinach is Nigella's, her Warm Spinach with Lemon from How to Eat. YUMMY!

In between all of this cooking and eating I was making a birthday cake. Another birthday, you ask? Why, yes, this time my nephew Liam's... he turned two on Sunday. Sweet cherub! Here is his Lala Cake. It's Tessa Kiros' Vanilla Cake from Apples for Jam. I only frosted the top, and put on orange sugar crystals and orange sprinkles. Orange, aka 'lala', is Liam's favorite color. It comes from a Russian song my mom sings to him.. Something about orange skies, orange trees, orange flowers.. and then she sings 'La La La'. Liam follows along, and since he was very little, he has associated orange with lala. So there! The cake itself has about 1/2 pound of butter and about 1/2 pound of sugar. I was a bit scared, but I figured, it's a kid's birthday cake. If his aunt can't pump him full of sugar two hours before his bedtime, then who can?? 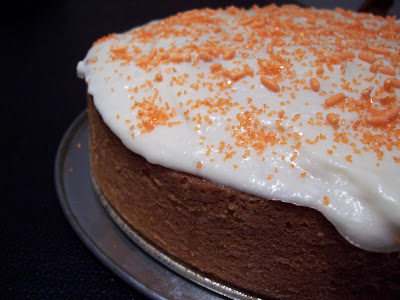 For the birthday meal itself, I made a 'healthy' arugula salad. Arugula soused in a lemon vinaigrette, sliced beets, shaved parmesan, toasted walnuts. Was very nice indeed!! 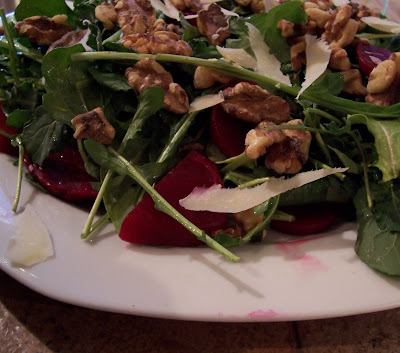 Of course all this healthy eating didn't stop me from stuffing myself with fried chicken wings (again!), my mom's vareniki (potato dumplings), bread with copious amounts of butter and caviar, and of course, the primo saccharino cake! It was SWEET! But I'd eat my fingers if they were covered in buttercream icing, so I had two slices, naturally. Liam had a little piece too. I think he was temporarily mesmerized by the orange cake to realize he was actually eating cake -- he, like his papa, is more of a fruit lover.

Then, I came home, and remembered my mom had given me a huge gift bag of sweet treats, as is customary for Purim. I quickly succumbed to my sugar coma and bid the weekend goodbye.

Wow, I am reeling just from reading about everything you've eaten! It all sounds bloody fantastic: Coby's wings, Nigella's rugelach, your mom's vareniki... pancakes and Chinese and sweet potato fries, oh my! :) I can understand why you'd be in a coma right now, but I'm certain it was worth it. Happy birthday to your dad, mom and Liam!

p.s. LOL @ the drag queen comment! I know exactly what you mean!

What a great weekend!

All your pics are great, I must give Coby's marinade a go, how could it be bad with all the yummy things in it?

Happy birthday the Mum, Dad and little Liam too.

Good idea re the sugar chrystal decorating, I'm sure I've seen decorating with jelly chrystals too, in an old book..