I don't often get pulled in by pictures in newspaper food columns. Not that I think that the photographers for publications like the New York Times aren't hugely talented -- it's just that there is less glitz and glamour that can often be found in glossy cookbooks. I think that is because as opposed to cookbooks, newspapers are selling the recipes, not the chefs. But, I spotted a gem of recipe in last month's New York Times that really begged to be made; Buttery Polenta with Parmesan and Olive Oil Fried Eggs and Garlicky Swiss Chard. A mouthful, I know. These were actually a combination of recipes, but I couldn't imagine making one without the other after seeing this photo.

Since I was on my own tonight, I knew I could do something quirky like have eggs and polenta and veggies. I don't exactly think Rafa would find that to be a suitable meal for dinner. He is quite suspicious when meat doesn't play a starring role, let alone no role at all!

So on with the two recipes:

I didn't have swiss chard or spinach, so used broccoli instead. I thought it would do well stirred around in a pan of olive oil, garlic and hot chilli flakes. The polenta, as always, was quick and easy to make. I added butter and pepper at the very end. And the egg -- well -- I don't have to tell you how to fry an egg. I found it pretentious though that the NY Times described it as an 'olive oil fried egg'. Um, I don't know what they fry their eggs in but it's always olive oil for me.

Then, it was just a matter of assembling. I have to admit to 'staging' the pic just a bit. It was dinnertime so I obviously couldn't get the gorgeous 'natural' light the NY Times pic got, but I tried my best. I always complained how awful the light was in my old apartment. Well, here, there are lights everywhere, but in the kitchen, they are spotlights, so wherever you go, you cast a shadow. So no to overhead shots -- oh well! It is so hard to make me happy, LOL.

Well it's not a Picasso, or Petrina Tinslay, but here is Ilana's knock-off picture, brought to you this evening by Ikea. Going fast to the highest bidder! 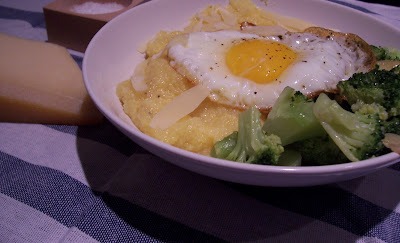 I love eggs for dinner. My other half would be less than delighted if I placed this in front of him too so perhaps I shall have to try it one night when I'm on my own!

Well, you know that you can actually fry an egg in butter!!!!! LOLLOL!