You win some, you lose some.

I was going to name this post "I'm the world's worst cook" but I had second thoughts after tonight's dinner.

You see, last night was an ABSOLUTE disaster, but let's get to that later.

I made Nigella's Shrimp with Garlic and Chili Pepper from How to Eat. Oh my nelly, is it good??!! I knew Rafa would like it -- he's easy in this respect, because it's basically Gambas al Ajillo, which he has loved all his life, being a Spanish boy and all. Shrimp/prawns cooked in olive oil, lots of garlic and white wine. As per Nigella's suggestion we ate them with a baguette, but not carapace and all. I've missed peeling shrimp at the dinner table, so this was one activity I really enjoyed. The white wine juices were amazing; so so good with the fresh baguette. I was so impressed by this dish, and it's definitely a keeper. 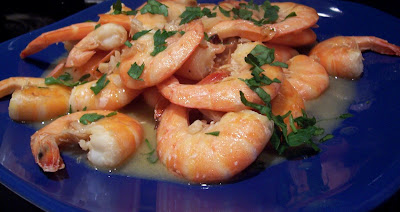 Last night's dinner was anything but, though.

I did another How to Eat recipe, this time the Steak au Poivre, or pepper steak. It should have been called Steak au Tears. It was just not good! Nigella says to coarsely grind some peppercorns -- which I did, in my newly converted spice grinder (formerly known as 'coffee bean grinder'). The peppercorns weren't too coarse, not too fine. I thought, 'perfect'. I got some two huge sirloin steaks, and my sister and Liam were joining us for dinner. Everything looked to be perfect, and I even had the potato and yogurt salad (from Apples for Jam) done ahead of time. The steaks were cooked beautifully, though not like shoe leather, much to Rafa's chagrin, but I'll get to that later.

Upon eating the steaks, however, we learned just how f&^%ing spicy they were!!! I know it is odd to say but I never thought pepper was, well, spicy. I guess when it acts as a coat for meat, it is. We could barely get through a couple of bites. I was so annoyed and embarrassed. We had to scrape off the pepper coating to get a few protein servings, but that was it. The potato salad wasn't much a redeemer either. My sister and Rafa liked it, I think, but I found it too bland, even though I salted it, and parts of the potato were not fully-cooked. I never like roasting or boiling potatoes whole, with skin on, because I never know if they are all the way cooked. I do test with a fork, and this time it did go all the way through, but I guess not enough. Well here's dinner. In true Ilana fashion I always takes pictures assuming the dishes will turn out as beautiful as they look -- this time I was very wrong. 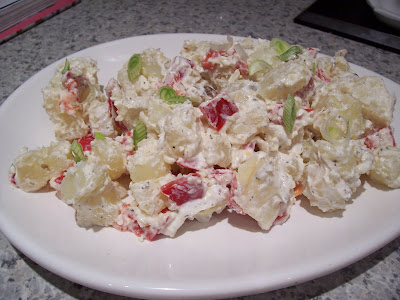 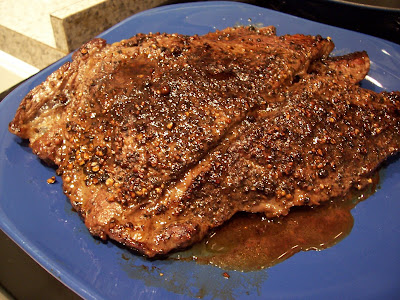 I think though that my family, me included, are just wooses when it comes to spice. I once made Nigella's Masala Omelette from Nigella Bites, and I couldn't feel my tongue for a week.

The doneness of the steak wasn't to Rafa's liking either -- he really likes things well-done -- fried to an inch of their life. The fact that the steak was juicy meant of course that I was trying to poison him, or at least that is what he thinks. This is one thing I know I will never be able to make him agree with me about, so I'm giving up the fight. Let him eat shoe leather -- what do I care!!!

Well next time, I'll cook steak, the way I like it, FOR ME, sans pepper please. That steak bernaise is looking good....

I do make peppercorn steak once in a while, and the thing I found made them ok for me was to sieve out the fine pepper bits, so that only the big bits in the sieve were used. This was something I once saw Delia Smith do, and it does take out the really fiery bits!

I have made peppercorn steak too - from a Gordon recipe - and it wasn't hot at all. I think it was using different coloured peppercorns - pink, maybe? Would that make a difference? I'll hunt out the recipe, because it was really nice.

Oh dear, it's so disheartening when things don't turn out the way we like.
They look amazing though!
xx

What a pity, Ilana! I've once tried Nigella's salt and pepper squid - boy, that was gorgeous!!! So I wouldn't have suspected anything wrong with this either.
As for Rafa's taste with meat, I can relate completely: much rather a shoe leather than any itty-bitty "bloody" bit LOL

I hate it when things don't turn out well. I too am a spice wuss and have to be really careful about how I interpret chilli quantities in recipes and I always have far less pepper than Chris. Good to know that your shrimp turned out looking and tasting beautiful though!

I love an honest foodblog!!!