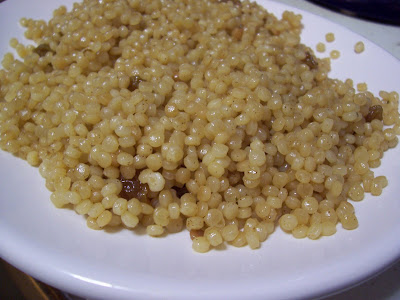 I love Nigella Lawson. She comes up with such awesome recipes; it seems there is no end to her creativity.

I haven't seen her BBC special yet, but thankfully, the recipes are available. After my friend, Jean, made the Festive Couscous, I decided I needed to make it too. My mind has been firmly set on getting rid of excess in my fridge and I still had quite a few pomegranate seeds leftover from the New Year's Eve party.

That is where the bling comes in. I love pomegranate seeds in recipes. They just bring out all the colors of the dish, aesthetically, and are so crunchy and tangy and yummmmy.

I had to improvise a bit because Nigella's recipe was an accompaniment for roasted poussins. The juices of the poussins play a part in the overall flavor of the couscous, but since I didn't make the poussins, I used chicken stock instead. Also, since I prefer Israeli couscous, I used that instead of the smaller grains most couscous in this world is associated with. I didn't bother with adding cilantro at the end -- blech.


Method
1. For the poussins, preheat the oven to 220C/400F/Gas 6.
2. Place the poussins in a roasting tin. Pour the oil slowly over the top of the top of the poussins. Rub the oil into the poussins so that they are well coated.
3. Place the salt, sugar, cinnamon and paprika in a small clean bowl and mix well. Sprinkle the spice mixture over the poussins.
4. Slice the lemon into quarters and then slice each quarter into four so you have 16 small pieces. Place the pieces around and in between the poussins.
5. Separate the garlic bulb into its cloves and place the pieces around and in between the poussins.
6. Transfer the poussins to the oven and cook for an hour to an hour and a quarter, or until completely cooked through.
7. Remove the poussins from the oven and then let them rest for ten minutes in their tin.
8. For the festive couscous, place the couscous, sultanas, spices and salt into a microwave-proof bowl and mix well.
9. Add the freshly boiled water to the bowl and then cover the bowl with cling film. Leave the mixture to sit for 10-15 minutes, or until the water has been absorbed by the couscous.
10. Remove the cling film from the bowl and stir the couscous with a fork to separate the grains. Carefully pour some of the juices that have collected in the roasting tin of poussins into the bowl. Stir the mixture again and season to taste with salt and freshly ground black pepper. Transfer the couscous to a serving dish.
11. Slice the pomegranate in half and extract a good quarter of the seeds. Place them onto the couscous. Sprinkle the chopped coriander over the top.
12. To serve, place the poussins onto clean plates and place the couscous alongside. Use the oven-charred lemon pieces and garlic cloves from the roasting tin to garnish.

You will notice the pomegranate seeds go on top of the couscous. Well, turns out I didn't have them after all. Rafa was home all day, and interestingly, the poms are gone! Hmmmn. He's cunning, that man is. Now he's at work so I can't grill him. Hmmmn, indeed. Well I was so annoyed that I could blingify my couscous, but I have to say it was still fantastic!! Mmmmm. So aromatic and flavorful -- a great dish! Will be making this again and again and again, as soon as I get more of that addictive ruby bling!

That Israeli couscous looks interesting anyway though without the ruby bling. Though I agree the ruby bling is pretty good when it happens.

My gosh, that Israeli couscous is humoungus!!!!!
I have found ready peeled pomegranates too, at my local 'Waitrose'. Fan-blummin-tastic I say!!!!!