Creamy Caviar and other funny stories

I really should read up on karma. I had really bad mushroom caviar karma tonight... ah let me explain.

A few months ago I went to a party with Rafa for his swim team. There was this chick there, Grace, that I had already found out from Rafa that she was a culinary arts student or chef or something like that. Apparently she used to work for Saveur. I didn't like her right off the bat. I'm sorry, but not all foodies are created equally. There are people, like me, that are happy to talk about food but don't like to show off that they know this or that, especially with people they have never met. Grace wasn't one of those people. I felt like she was reading me her CV. When I told her that food is my thang, she asked if I read foodie magazines. I said, 'yes, I read Delicious.' She said, 'Never heard of it. Have you ever seen Saveur?'... Um, I know what you're getting at Grace. I told her 'no', by the way.

So I come to tonight where I was planning on making a sort of 'duxelle', a mushroom caviar. Everything seemed to be going well... I chopped up the mushrooms finely... 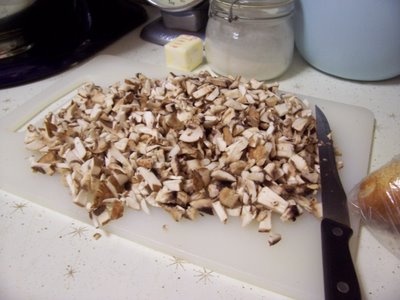 and then I sauteed them in butter with shallots and garlic and white wine. 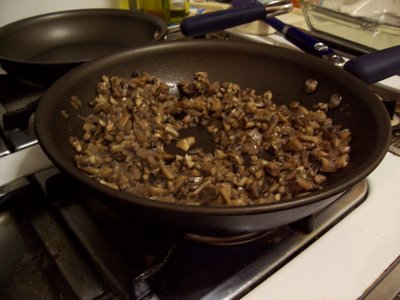 I let the mushrooms cool and then went in the addition of sour cream, lemon juice and chopped parsley. I started to think that the mixture looked too white -- much whiter than the recipe picture. Gulp. I added 1/2 cup of sour cream instead of 2 tablespoons!!!! Agggghhh! The mixture tasted good, just, you know, sour. It wasn't bad actually but I kept staring at that picture and thinking about Grace's anal retentive duxelle and I wanted to weep. I quickly sauteed another two ounces of mushrooms and added it to the mixture, and though it looked slightly less white, it was still very very creamy. 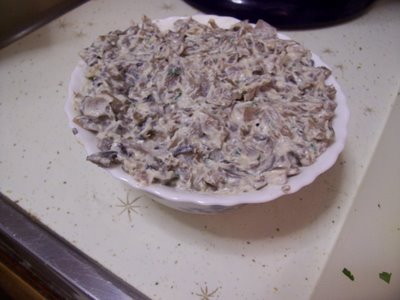 I had a bit on a water cracker. 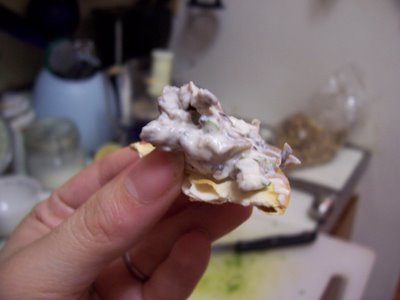 It tastes good, so I'll leave it. It actually looks exactly like the mushroom dish my mom usually serves us for holidays. Well there goes my idea to have a totally different Thanksgiving this year!!!

The making of the dressing was not as eventful. I followed the recipe step by step, even though it called for two sticks of butter (heart attack, anyone?), and got, well, dressing. 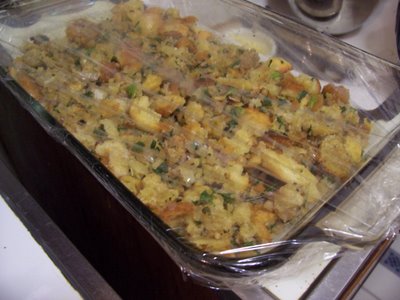 I am going to bake it for 45 minutes tomorrow alongside the turkey.

That is one funny story! Hehehe.

Those people wind me up too. I have a colleague who is actually really fussy and can't cook (buys her food in in boxes to microwave )but is terribly snobby about food nonetheless.

The stuffing/dressing looks good. You'll be asleep now I guess but you're definitely well on track for tonight.