Murphy's Law. Everything that can go wrong inevitably will. I went to bed last night dissatisfied because at having taken another taste of the dressing, I detected a hint of over-saltiness. Of coures, I panicked, knowing full well that oversalting something is not easily fixed. I had no more stale baguettes.. I was screwed.

So, in bed, I fell asleep quite fast hoping it was all a bad dream. I woke up at 3:33 am to find that it wasn't a dream, there may really be a chance that the dressing is too salty, even next to a bland-ish turkey. For about 45 minutes I tossed and turned and cursed myself. I finally fell asleep again hoping that in the morning I will be able to bake a kick-ass apple pie to make up for my follies.

So at 9 am today, I started. Peeling the apples was not as challenging as I had thought. I used a vegetable peeler because a paring knife is not safe in my hands. The mixture of the sour cream and sugar and various other things was a doddle to make, and I carefully folded in the granny smith apples.

I had no worries about the pie shell because that was bought. I am a pastry virgin and I wasn't about to 'lose it' on Thanksgiving Day. So in went the pie into the oven for a few minutes while I got on with the streusel topping.

There have been lots of comments about this pie on the Simply Recipes site. Some people have commented how the butter is too soft when making the topping; that it melts into the warm pie. So, I used kinda fridge-cold/kinda room temperature butter, and mixed it in with the flour and brown sugar and cinnamon. This is where it went wrong. This was not a streusel topping. This was a cinnamon sugar dough, at best! I was worried. It was one buttery mess; definitely not crumbly and impossible to sprinkle over. And then I had a sort of fleeting thought. What if the recipe was wrong? What if it called for too much butter? I looked at the recipe again, while the oven timer was ticking away that I would need to add the topping soon. I saw 1/4 cup of butter; ok, no problem, that is what I put. And then I did a double-take, I put in a 1/4 lb. of butter, not 1/4 cup. I put in double the amount I needed. WHAT IS WRONG WITH ME?? I know I am not the best cook in the world but I honestly don't make these many mistakes in a row, especially when I have been obsessively staring at the recipes for a week.

I had five minutes left on the timer and refused to mess up again. So, I started from scratch on the topping. I still didn't get coarse crumbs, but it wasn't as bad as my first attempt. I patted the topping on the pie, and since it was a softer crumb, there wasn't enough to cover the entire pie. I just went with it and thought of this as my own variation... as long as it tastes good. Then, I remembered that I had ran out of unsalted butter when making the first topping, so I used salted butter for the second one!! Yikes! I tasted the little bit left in the bowl -- a tad salty but still kind of streusely due to the brown sugar and cinnamon.

The pie looks pretty though... 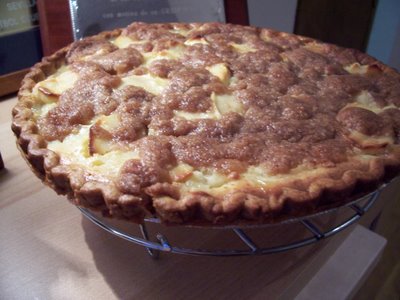 With the leftover streusel topping/dough from my first attempt, I thought it'd be clever to make cookies out of it. I remembered how Nigella once messed up on a recipe and made something even better with it.

So, I rolled the dough into balls and marked them with a fork. This is what they looked like after 12 minutes in a moderate oven... 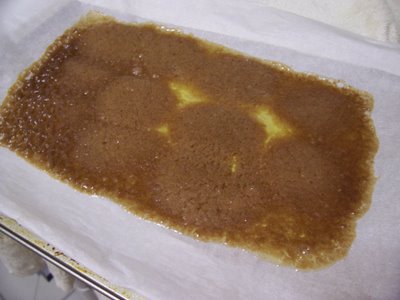 So, Nigella Lawson I am not! Looks like an exhibition piece -- perhaps I should display it at the MoMA. Experiments with Butter by Ilana. I would think all of this is pretty funny, but I bought unsalted butter especially for these recipes and I wasted an entire stick on this mess. Oh well, live and learn.

My mom is here presently. The turkey is due to come out in about an hour and a half. Everything is almost done, and I'm looking forward to a great Thanksgiving -- albeit a salty one at that.

the pie looks delicious anyway. I do things like that sometimes. A couple of weeks ago I was baking and I weighed out the butter and left it in the scales - just forgot to add it - and the recipe worked! Result.

Thank you for keeping me abreast of your progress. Happy Thanksgiving sweetie, I suspect you and family will soon be eating a fabulous meal.
Kathryn x