The Demon Baker of Fleet Street 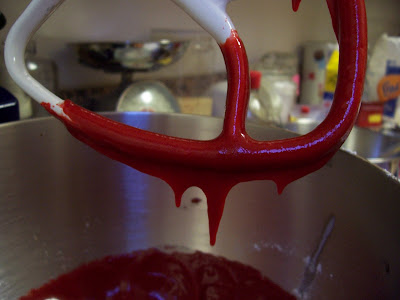 Whatever Rosa wants, Rosa gets.

I made my friend, Rosa, ‘mad’ a few months ago because I had mentioned off-handedly that I would make red velvet cake for her birthday… and I never followed through. There was something about the stories of needing three bottles of food coloring per cake. I am very Jekyll and Hyde when it comes to food. Sometimes I’m a purist that just needs to use organic sugar, and other times I’m trashy and all I want to eat is fried chicken and mashed potatoes.

But since Rosa went on vacation to Italy for two weeks, I thought I’d follow through on my promise by making red velvet cupcakes for her return.

I have to admit – I haven’t had this much fun baking in a long, long time. The amount of red food coloring WAS scary, truthfully – a tablespoon for the batter, and that is halving the recipe. But it turned the batter a shockingly blood-red color… It was truly mesmerizing.

Since I followed a cake recipe, I guessed at amounts and time for baking cupcakes. Half of the cake batter recipe comes to about 10 cupcakes, and 20 minutes is just enough time to bake all the way through but still be beautifully soft within. 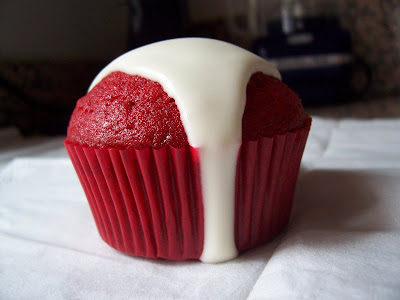 The cream cheese icing didn’t go as planned, but I blame our heat wave on that. I used Nigella’s cream cheese recipe from her Guinness cake, which I have made countless times – the cake and the icing – but for some reason it would just not thicken. I finally gave up and decided to go for a hobo-chic look to the cupcakes. Trying hard to look like you’re not trying at all…

I think they turned out beautifully, and most importantly, the belated birthday girl was both surprised by them and thought them to be absolutely delicious. I tasted one; it was good… f***ing good! Definitely a recipe to make and make again.

OMG that is red Ilana and truly beautiful.

Wow . . I Would Kill For One Of These