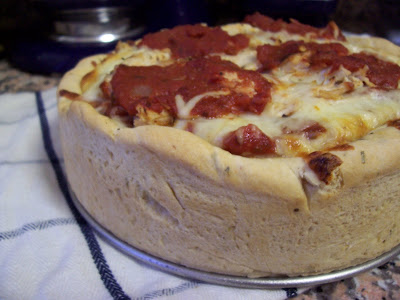 My coworker, Christy, mentioned she made deep dish pizza the other day, and that got me thinking, why don't I have a go at making it? As a kid I didn't really like deep dish or Chicago-style pizza, growing up on thin crust Brooklyn pizza. But tastes change, and if I could make a pizza with the ingredients that I know and like, why not?
The dough is homemade, and so is the sauce. The chicken is baked in my own oven with the 'pizza' spices I have come to use for everything (thanks, Maria!). It was as simple as putting the dough in a springform pan, adding sauce, then chicken and finally cheese, and then repeating it. Very much like lasagna. As I hoped, the dough rose beautifully in the oven, creating a golden crust to encase the toppings.
The spices made an appearance in the dough, the sauce, and the chicken. The ingredients in the spices are in Norwegian, so I couldn't tell you exactly what makes them so good, but I think there must be oregano in there and also red pepper flakes. I tried to make the sauce a bit chunky, to give more height to the pizza, so I added red pepper and onions to the crushed tomatoes.
Everything worked out well -- exactly how I wanted it. That is saying a lot, because a lot of dishes on paper come out different in reality for me. I'm glad this deep dish was everthing I expected and more!

YUM! That looks delicious. We are big pizza fans here so I'll definitely try this :)