The Best Ice Cream Ever? 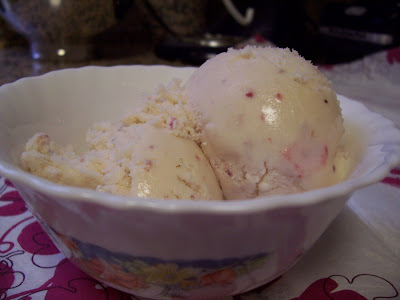 Last summer, being an owner of an ice cream maker I hardly used before, and being happily unemployed, meant I got to experiment with ice cream making a lot! As much as I would push the envelope and add and take away ingredients from an awesome ice cream recipe courtesy of Tessa Kiros, I couldn't bring myself to make ice cream the real way -- making a custard, cooking sweet eggs, ye gads!
A few days ago, I got a sudden shock of bravado into my system. I wanted to make ice cream - the real way! The inspiration was a pintful of fresh strawberries in the fridge and the dire desire to turn them into an ice cream paradise for one.

I quickly turned to Nigella's Forever Summer, where there is a whole chapter dedicated to ice cream. And then I saw - I needed to use 10 egg yolks! Wow! I know eggs aren't expensive, but I honestly couldn't bring myself to separate 10 eggs. What would I do with all those whites? I'm not one of those organized people that puts things into little baggies and decides to make meringues on a moment's notice. Plus, 10 egg whites = a lot of friggin' meringue!
But I still wanted, no, needed strawberry ice cream. New summer, old dog, old tricks. I again used Tessa's recipe as an idea, and added strawberry puree to it.
So instead of light cream, I used heavy cream. Instead of regular milk, I used whole milk, because I had some left over, and I don't drink it at all. To the maple syrup, I added a couple of tablespoons of golden syrup, just for fun. The strawberries were pureed the way Nigella described they should be in her ice cream recipe. Strawberries sprinkled with sugar, left to steep, and then pureed. After I added the cold 'batter' of cream, fatty milk, vanilla, and maple and golden syrups to my ice cream maker, I added the puree, and let my Kitchenaid ice cream maker churn away. Twenty minutes later I got a wonderfully-scented soft serve strawberry ice cream. A few hours later, the best damn ice cream I have ever tasted.

mmmm, that looks so good! I recently made Nigella's strawberry ice cream for the first time. I'd made 2 pavlovas for a party and I had a whole lots of egg yolks to use up, I couldn't bear to waste them. I'm so glad I did, it was gorgeous :)

Haha, what a great way to use egg yolks!! It would have been funny if I HAD made Nigella's strawberry ice cream, and then made 2 pavlovas for a party following that. LOL. I'm glad you enjoyed the ice cream. Next time you want a bit of a shortcut, try out my recipe. Quite delicious!