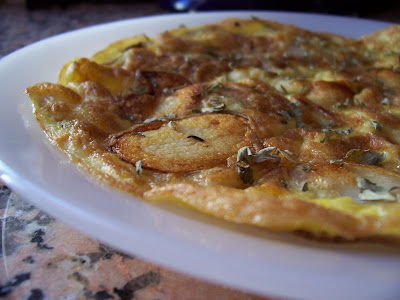 The other day when my sister and I were making the hamantaschen, she mentioned what a waste it was that we had to throw out the rest of the beaten egg that we used to glaze the cookies. There was only a scant egg there, so not much of a meal at all.

I made another batch of cookies this afternoon to take to work.. And again, faced the less-than-one beaten egg in the bowl. I didn't want to throw it away this time because I was actually a bit hungry, and greed took over.

I took a small new potato, unpeeled, and sliced it very thin. In a small non-stick pan, I fried the slices in a little bit of olive oil and butter and dried red pepper flakes. Since it was just a few slices, they all managed to fit in one layer. Once they were golden on both sides, I drained the excess oil, and then I added the beaten egg (to which I added some salt and pepper). It took mere seconds for the egg omelette to set. I turned it over, cooked it a bit on the other side, and then plated it.

This was delicious! Of course since the potatoes were so small and sliced so thinly, they were cooked through. The little amount of egg I had was just enough to cover the eggs and make a lovely thin coating... Made a lovely little lunch!