In continuation of the Weekend Breakfast Series I seem to have been doing lately, I had a late, late breakfast today due to waking up quite late and then sitting chomatose-like in front of the TV watching a Food Network show, one after the other, including the ghastly Sandra Lee.

Eventually, hunger took over. Our fridge is currently very bare. We haven't had time to do a proper shopping trip, and since I worked yesterday all day, I didn't have time to take a weekend day to get shopping and cooking. My first on-site assignment was at the W New York - The Court, so instead, I had to get some food inspiration from the F & B (that's Food and Beverage to you laymen.) ;) For breakfast, we served a Chorizo and Potato Frittata with Fresh Herbs, and I loved how the grated potato melted into the soft frittata, so I wanted to recreate it as much as I could at home with my limited amount of ingredients.

Going in the same vein as last weekend's breakfast, I went with the small new potatoes we have at home. I sliced the potato very thin, and then stacked up the slices to slice lengthways to make little potato sticks. I sauteed the potato in a little bit of olive oil and some chopped rosemary. Once the potatoes went golden, which literally took a minute, I threw in a couple of eggs and started scrambling the whole thing together. And that's it. Since the potatoes are so thinly cut, they do get nice and soft so quickly. I like that so much more than boiling regular potatoes - takes ages compared to this. And this could be made with greater quantities so it could turn from a breakfast for one to a breakfast for many. 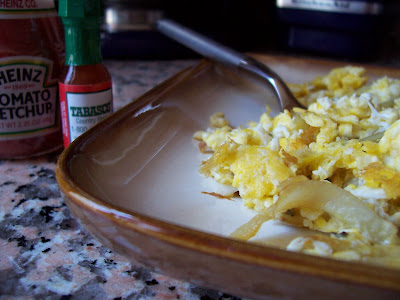 And you could tell I'm a real rookie when it comes to meeting planning and going on-site at the hotels because I really got a kick out of the tiny Tabasco and ketchup bottles. They are so friggin' cute! Of course I put some in my purse... Came in handy today for my hotel eggs. Bon appetit!