It's been about a millenium since I've baked a cake -- and a chocolate one at that. But, last weekend, I made Nigella's beef and Guinness stew, and I had some stout leftover. Not in the mood to make another stew, this weekend I decided to make Nigella's Chocolate Guinness Cake. I didn't have any of the ingredients for the icing, so I decided to leave it unadorned, cause Nigella said it would still be delicious -- and the woman knows about cakes! 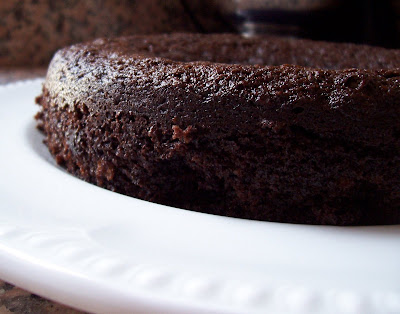 Even though I halved the recipe, and thus reduced the baking time, it turned out brilliantly dark and moist. I'm actually amazed how moist that cake is. I had baked it around noontime, and about 10 hours later, it was as moist as when I took it out of the oven. I tented some foil around it, and I'm hoping my sister comes around tomorrow for a sampling. She always says I bake really great things and tell her about it but never actually invite her around. She has a huge sweet tooth, so that is mental torture for her. I get it. I don't think I could survive without anything sweet either. So hopefully this dark beauty will be devoured by a very pregnant beauty soon.

That looks so moist Ilana. I do hope your sister likes it. I'm sure she will (unless she's like me - I can't bear the taste of beer, lager or stout, weird I know)
Best of luck to your pregnant sister!
xx

Now you know this is one of my favourite cakes, I even have the photo of you icing it in my kitchen!
That looks lovely Ilana, I could just eat a slice now.

That looks so moist and tasty. I could just eat it right now :)