Pouspous, but with no couscous...

Rafa's sister had come to visit for the holidays, so it would only seem right to prepare a nice dinner for Christmas Eve and Christmas day.

I was out touring with them for most of the day, so had to plan for an easy dinner to put together for when Rafa came home that evening. (He worked all of Christmas and the days that followed.)

I am wholly inspired by Nigella when she is doing her Christmas cooking. I had mentioned her Christmas Kitchen show, which I think is one of her best. On one of the shows, she had made roast poussins to go with some festive couscous. She had called it her pouspous with couscous, LOL. Gotta love 'er.

I've never roasted poussins before, but Christmas seemed to be the perfect occasion for them. In her newest book, Nigella has an easy roast poussins with sweet potatoes recipe. I had combined that with the idea of basting the chicken the way Nigella bastes her turkey for Christmas - with a mixture of maple syrup and butter.

So, I brushed the poussins with that mixture, every few minutes, and the sweet potatoes were just as easy. They were sprinkled with some olive oil, cumin and cinnamon. Baked in a hot oven for an hour or so. The results were spectacular. 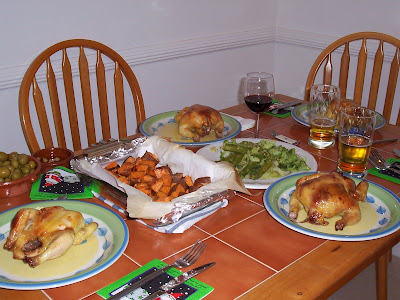 Everybody seemed to really enjoy dinner. As another side dish, I also blanched some broccoli and asparagus, and then I tossed them in the mustard sauce that is also featured in Nigella Express.

Here's my sis-in-law, enjoying Xmas eve dinner. As you could see the sweet potatoes were almost gone - they were a big hit, especially with Paki's boyfriend, Kike (short for Enrique). He asked me to make them again, and I did, for New Year's Eve dinner. 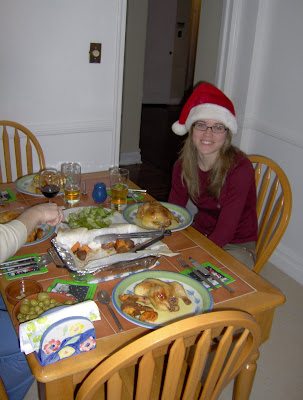 No dinner is complete without dessert -- another Express favorite, Jumbleberry Crumble. This was delicious too, and I even managed a few bites after eating an entire poussin! 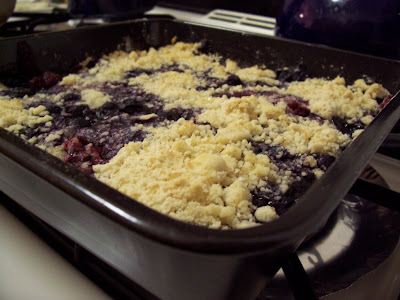 At dinner, I had made a toast that it was great sharing the holidays and our home with family. Our often unused dining table was filled with food, drink, conversation, laughter. It was a wonderful evening...

The next night, for Christmas day dinner, I had made gambas al ajillo, and an antipasti dish of prosciutto, pecorino romano cheese, olives, etc. All was well received again. I was lucky my guests had such big appetites. :) 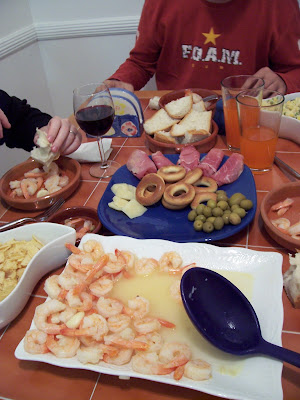 And so she's back!

Wow Ilana, that all looks spectacular. I particularly like the look of those prawns.You have inspired me to make the sweet potato dish.

Lovely to see you back!

Looks like you had great food over the holidays, I'm sure your guests were very happy to be so royally spoilt.

Lovely to see you back blogging!