For the two weeks surrounding the holidays, my sister-in-law, and her boyfriend, were visiting us from Spain.

Even though most of the time was spent outdoors, showing them around, I did have little pockets of time to do some experimental cooking... But those that know me know that for me, 'experimental' is using a new brand of milk... not exactly scientific experiments here. I have been obsessed, however, for a year or longer to get the perfect foccacia. It was my favorite thing to eat at the Sullivan Street Bakery in SoHo. Their pizza bianca was to-die-for.. soft, crusty, with faint hints of olive oil, sea salt and rosemary. Giada DeLaurentiis once made a pizza bianca on her show, and she used bought pizza dough... I never had a chance to use, though, the recipe for the dough she included in the pizza bianca recipe. And of course, forgetting about that recipe completely, I wanted to experiment to make my own foccacia this holiday season, so I used the dough recipe from the fried pizza experiment. I had remembered how lovely that dough was -- so soft and easy to work with -- I felt I was on my way to cracking the code.

So for the past few weeks, I've had some successes, some flops. I had gotten the perfect crumb - but hence, the dough was too salty. That was probably due to there being salt in the dough, and on top with grated romano cheese and far too salty (and slightly inauthentic) sea salt -- shame on me for using a brand other than Maldon! I've yet to get the perfect foccacia, but I know that day will come soon...

Here is my foccacia topped with romano cheese and arugula. Mmmmm. 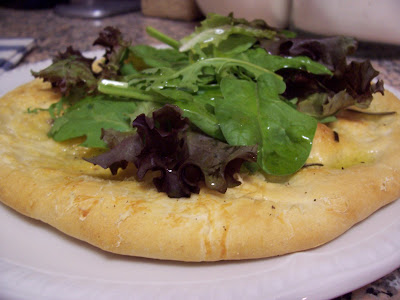 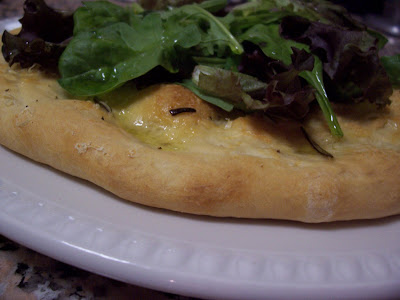 Mmm, I wish I could have a slice (or the whole) right now!