A Wonderful Friend. An Inspiring Book. A Delicious Cake. 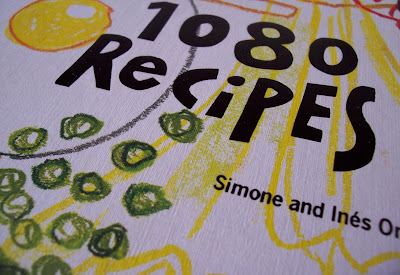 I got quite a surprise a couple of days ago. My friend, George, sent me the most beautiful book as a present for Hanukah. It was incredibly generous of her to think of me, and no words could really express how thankful I am for this wonderful surprise.

I knew the only way I could show her how much I appreciate her and the book was to cook something from it!! :) But it was hardly something I needed convincing to do. 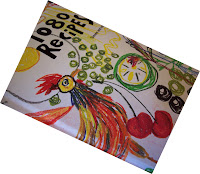 The book, pic above and to the right, is so beautiful! The cover looks as if the artist drew on it with colored pencils. It is so warming. That is the only way I could describe it. A bit of background: 1080 Recipes or 1080 Recetas de Cocina is a bestselling book in Spain - and was actually published more than 30 years ago. It makes me happy to think that most households in Spain have this book on their shelves, whichever printing it was.

Apart from there being recipes for virtually anything you can think of, and lots of things you can't, there are beautiful illustrations in the book as well. It's like browsing through an art book. Plus, doesn't the cover look like a Chagall??

I love the artichoke and the artist's rendering of the tortilla española. I decided to get cooking to see what this book had to offer.

I wanted to start with the very simple chocolate sponge cake, the biscocho de chocolate. I guess it's odd to start off with something so non-Spanish, but really it was the feeling I got from the book. That this book has been around longer than I have been. To me, chocolate sponge cake is old-fashioned. I've said before how it reminds me of my grandfather; how he would come home Saturday morning from synagogue, with chocolate cake for me. It gives me a wonderful feeling to remember him, and making a chocolate sponge cake helps me do that.

The cake is really easy to make, and happily uses ingredients that you would probably have at home anyway. I also liked that the chocolate batter could be made in a pot. Then, beaten egg whites are folded into the batter. I was a bit worried about the batter before the addition of the egg whites because it looked too thick for a cake. However, after adding the egg whites and a bit of elbow grease, the batter became a lot more workable and more chocolate cake-like.

I used a loaf pan my very good friend, Maria, gave me. What came out was a really beautiful chocolate loaf cake. 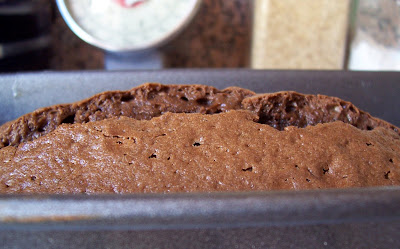 I instantly felt comforted after smelling the cake baking in the oven. I think bakers are happier people. How could they not be? 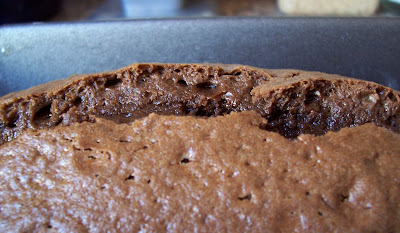 I only waited mere minutes before I dug into this cake. The top was crispy and the crumb moist and delicious. 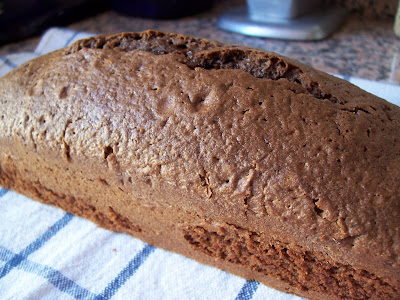 I'm hoping this cake becomes part of my repertoire. Let's see what the esposo says when I serve him this cake! I'm going to serve this cake this evening after dinner. We don't usually have dessert with dinner, so it feels like a treat. We'll be having Nigella's pork chops with mustard cider sauce. Not a typical dinner a Spanish housewife would serve, but I'm not Spanish, and not really a housewife either, but a domestic goddess-in-the-making with a Spanish accent. ;)

I'm so glad you like it Ilana and hope it gives you many hours of cooking/kitchen pleasure.

The photo's look amazing and I could just eat a slice of that cake right now, fabulous :)

Sarah, I did sneak in a couple of bites before el monstruo took over. :)