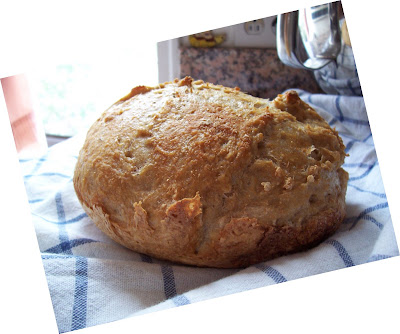 All I could think about these past few days has been bread! It occurred to me that I don't really eat bread anymore. I never used to be a big bread eater, but when I worked in Crapco, I got almost addicted to The Sullivan Street Bakery's pizza bianca.

Now, at my new job, I sneak into the Grand Central Food Market on lunch breaks, browsing stalls I could never afford to shop in on a daily basis. The aromas from the bread shops are intoxicating. At certain moments, all I feel like doing is going into a dark room with some classical music playing and munching on an entire sourdough loaf. I want the crunch; the punchiness of it.

As I have posted before, I am trying to eat more healthy foods, and white bread is a no no. I purchased some whole wheat flour the other day, wanting to make some whole wheat banana bread muffins... But today I gave into my bread desires, and whipped up a whole wheat-esque Minimalist Loaf.

I made this recipe, but I used half whole wheat flour, and didn't bother with fiddling with towels or cling wrap. I let the dough sit in its tupperware bed for about 18 hours, and only formed it once before dropping it into its oven within an oven. 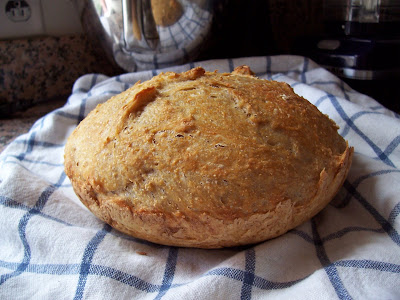 The bread turned out amazing. Rustic, gleaming and golden. Just what I was after. I know a lot of people are impressed by bread bakers. They treat them like they split the atom. Truthfully, not all bread baking is easy. But this bread is so simple to make, I almost feel like a fraud in saying I baked bread this afternoon.

After having some warm slices of bread, I collapsed into a carb coma on the couch. Sundays are made of this. 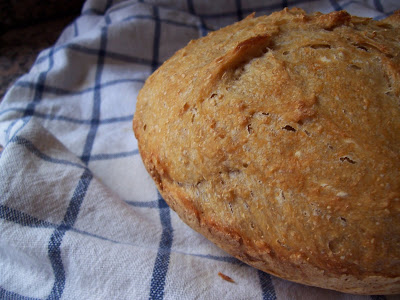 That's great that you like the whole wheat version.
I'm in a dim sum coma today.

Ilana, I love this bread recipe and make it quite often. I feel like a fraud telling people I 'baked' bread because it is so easy. Your version looks delicious.