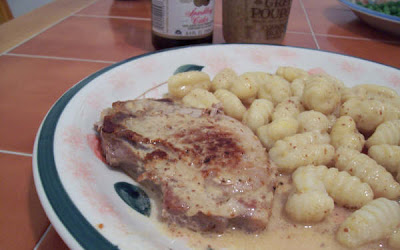 Eating gnocchi again is not really a coincidence. I had initally bought them to make Nigella's Mustard Pork recipe. I kept chickening out, or porkening out (ha!), from making it because I wasn't sure Rafa would go for a pork chop and cream combo. He comes from a tradition of eating pork chops a la plancha, off the grill, and not with a lot of flavor boosters. Just the standard S & P.

I finally decided to bite the bullet in an impromptu mid-week meal. We had been shopping at the supermarket and Rafa spotted some cider for me. Now, I have to admit, it was non-alcoholic cider, which is basically carbonated apple juice, but who cares... That was the closest I got to finding any of the hard cider Nigella mentions in her recipe. I guess not a lot of Brooklynites drink the stuff.

After that, I pretty much followed the recipe completely. It's a wonderful recipe, only a few ingredients, and literally done in no time. My pork chops were not the best quality, I admit, so it came out a bit tough in the end. If it was just me eating them, I'd cook them a lot less, but Rafa is always afraid I'm trying to poison him. Hmmmn, with his good looks and sparkling personality, I wonder why he would think that!!! Speaking of which, I didn't tell Rafa the dish was inspired by Nigella's experiences in France. He doesn't like the French. Don't ask me to explain it. It's stupid. Something about farmers in the south of France stealing strawberries from northern Spain. I don't know why he actually cares because he doesn't even like people in northern Spain either. But I digress!

The dish was fab! The sauce was really lovely. I used light cream, and it was lovely with the gnocchi and pork. Rafa really loved the sauce too. He said that he hardly tasted the sauce at first, and I told him I deliberately did not put a lot of sauce on his pork because I was worried it would be overpowering. He poured on a whole lot more, and we were all happy campers. 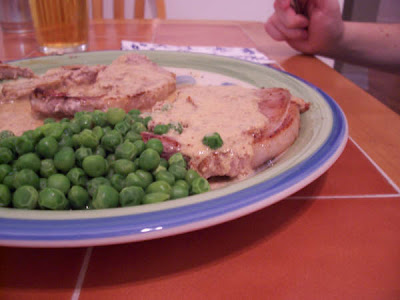 I've heard from other reviewers that the sauce is a bit overpowering because of the mustard. But I used a mild Grey Poupon, and I guess the sweet cider made it even more mellow. It was lovely and slightly sweet. Really lovely. A great meal for everyone, and dare I say, kiddies and fussy husbands everywhere. :)

I've made this a lot since the book came out. Hubby must like it because he came home with a bag of gnocchi last week!