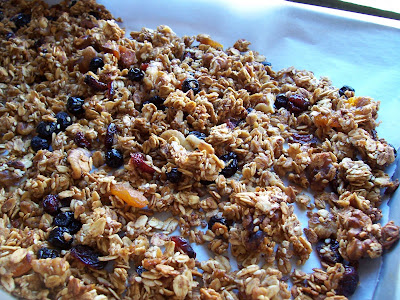 I'm going to start off by saying I won't tell you how much this meal is worth WW-wise. Way too much. But it's delicious, so there.

You don't have to be a genius to know I nicked the idea of this granola recipe from Nigella. But she nicked it from some guy named Andy in Fairfield, Connecticut, so I don't feel as bad. :)

I love Nigella's granola recipe. I don't make it often enough but was suddenly inspired this past Sunday for some reason.

I used the items from my cupboard that I thought would taste fab in this granola, and I wasn't wrong. The only bad thing about this granola is that it is a lot more calorific than you would expect granola would be. But it's all natural ingredients, so that is one reason to eat it. Or at least that is the reason I'm using to justify my endless need to eat it all the time!

3. Spread on baking sheet and bake for 40-60 minutes (till evenly golden, after one turning).

I make a lot simpler thing that I can virtually stir in at any time... tastes just as good.

melt a knob of butter +tbsp of sugar + tbsp of honey in a wide pan. Add chopped nuts, stir to coat them in the mixture (this helps them get glazed, so the sequence of additions matters here), about 100- 150g rolled oats (or oat flakes as they are called here). Stir. Tip out to a large (lined) roasting tin, roast at 150C for about 10mins. Any dried fruit can be added afterwards. My fave combo is either almonds or cashews with dried cranberries or a mixture of jumbo dark and golden raisins.

My manicurist always wonders about the strength of my nails... I tell her that it is all down to my granola breakfast! Plus, doing a granola is a good way to get rid of all those half empty packets of nuts and dried fruit that would otherwise remain in the cupboard.

Are you doing Weight Watchers? If so good luck, I've done it and it does work very well. I'm going to try to make a lower sugar version of granola as I love it but eat way too much of it when I make it!

I love Nigella's granola, mmm. A lot of her recipes are best not point-ed out!

I have something for you here
http://vadhajtas.blogspot.com/2007/09/piece-of-forest.html

I'm wondering if I can't find brown rice syrup, what should I use?

I found this on Food Subs. Hope it is of help to you. :) This is a lovely granola indeed. Try Nigella's Fairfield version too; it's delicious!