The Story of Dew Water and Little Tree

My time in Israel was a chance to reconnect with lots of family members I have not seen in a long time.

One of them is my mom's cousin's family in Haifa. When I was young, I would play with my Haifa cousins as if they were my sisters. I would only see them after many years, and each time, we were shocked to see how we all grew up, but still essentially stayed the same.

Meital, my mom's cousin's youngest daughter, is just how I remembered her, even though the last time I saw her was in 1999. One thing I was happy to find out on this visit is that she is a big foodie. She even brought a homemade challah to dinner. (It was delicious!) Like me, she would frequent food forums and take food pics, and she even knew of Nigella. I felt such a kinship with her; we had a lovely time talking about food and what we cooked when the moment inspired us.

Like other Israelis, Meital is a bold traveler. She and her boyfriend, Ariel, (pictured below) went on a three month tour of Central America. She took really exquisite shots; I mean ones that really took my breath away. One of them is the blog header above. I just love the colors of the picture. It really echoes the beauty of Central America. I wish I could go on a similar tour. 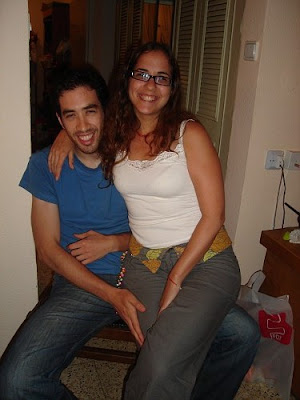 I know that Meital occasionally reads this blog, so apologies, darling Meital, for posting a picture of you and Ariel without your permission. But I think all my friends would agree the two of you are just gawjus!!! And it helps me knowing I have such a good looking relative. :)

For those wondering about the post title, Israeli names, if not biblical, are usually very creative and often touch on aspects of nature. Meital means dew water, and Ilana, well, is tree. But since I'm little and was called Ilanit as a child, I'm little tree. I have a feeling that Gwenyth Paltrow would do well in Israel with Apple and Moses. Chris, well, she could leave him to me.

Wow, you and your cousin are so alike, Ilana, I thought it was you at first sight (and wondered...)
What a nice story about your names, I wish I had one like that

Oh, you have such a resemblance to your cousin Ilanakins!!!

The names are lovely, I just got called after my Grandmother, and traditionally, have named my children after their Grandparents, all 4 of them, LOL
xx

Anna, we traditionally also name our children after the departed... I guess at the time we were born, all of those names were taken since we are both the youngest of three.
:)