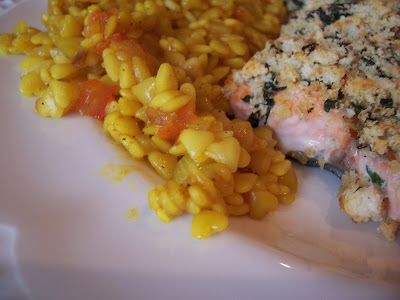 I have been back for a few days now, and I haven't really made anything or gone shopping for food. I'm still in that haze of, 'am I really back?'. But, yesterday, I got into a panic of how there is very little for me to eat at home, and I would need to remedy that quickly, as I've already done our usual takeout of sushi or pizza since I've been back.

Francesca gave me a huge cookbook of Israeli food, and I wanted to try something from there to ease my way into cooking again. I decided on a side dish of ptitim (Israeli couscous), so I chose fish as the main.

Firstly, let me say what a wonderful book The Book of New Israeli Food is. It's huge and beautiful and full of really great foodie history and recipes.

The author is the editor of Israel's most famous cooking magazine, Al Hashulshan (At The Table). Just the fact that they have a whole chapter devoted to ptitim is amazing and wonderful. It is said in the book that ptitim is really a kiddie type of food, and Israelis were shocked to see it crop up on menus in trendy restaurants in London and New York. I too was surprised one day last November when I saw a Food Network cooking show showcase this ingredient. I had forgotten how much I loved it until then.

The recipe I chose to make is Ptitim Casserole with Chicken and Vegetables. This is technically a one-pot meal, but since I was making fish, I cut out the chicken and some of the vegetables.

I should say here that Israelis have become pretty inventive with the ptitim shapes. They are normally pearl shaped, but you could also find stars, rings, orzo-shaped, and, as in my case, hearts.

So I sauteed some onion and garlic in olive oil. I added the hearts and fried them for a little bit. Then I added some finely chopped tomatoes, turmeric and hawaij*, a Yemenite seasoning mix. To this I added some boiling chicken stock, lowered the heat and covered the pan. This cooked for about 17 minutes. Mmmmmmm.

The 'casserole' accompanied a fish dish I got from Good Food magazine. I used salmon instead of the cod, though. 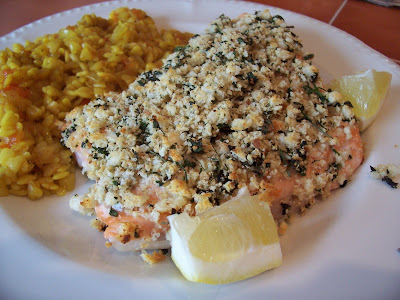 All was delicious but I realized as soon as I sat down that I had completely lost my appetite, so I had only a few bites of each. It's really muggy here, so that probably contributed to it. What I am really craving now is some lemon arktik... what a shame I can't have it! I've decided that in order to be happy here I need to surround myself with things that I could get in Israel, like the Israeli shampoo I just love the smell of. That is easy to find here... arktik, not so much. Oh well, you can't have it all. I'll have to resort myself to Ben & Jerry's. It's a tough life! :)

Mix all the ingredients and keep in an airtight jar.

Oh Ilana you've just inspired tonights dinner for me. That looks so tasty.

I'd gotten some king pranws out of the deep freeze and knew I was using ptitim but how?

Well now I know, many thanks sweetie.