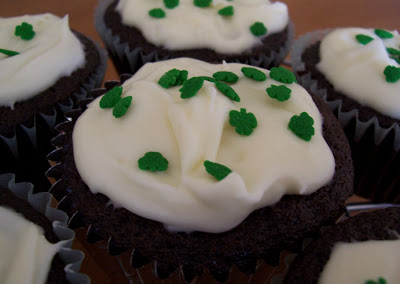 What IS it with cupcakes?! I think I've posted before how little cupcake cafes are to be found everywhere... in NYC. And now I read that they are quite the thing in LA too.

I have to confess that before quitting Crapco, I would daydream about opening up a cupcake cafe. And then when my unemployment became a reality and I was left to contemplate the rest of my life, I felt that having my own food business is just about the worst nightmare I could dream of. And not hypothetically. Last night I did dream about putting together a menu. It was one of those dreams that would stop at a certain point, and then I'd return to the beginning, none the wiser, and actually more annoyed with a menu I just wasn't able to put together.

I think my dream had something to do with a conversation I had with my friend last night. She is a scientist, and not very happy with her job. Coincidentally, or not, she is an unbelievable baker. And not simple cupcakes. Elana goes all out with piping, layers, figurines, shaping gum paste, etc. She told me over the phone that she recently went to a party where she met a former scientist who now decided to open up a flower shop. And at this party, someone told her that a high percentage of the science field is being lost to unhappy scientists running away to pastry school.

Are we all inner bakers? Do we all have inner voices telling us to quit our jobs for days and nights being coated in flour? If I do have that voice, I've told it to shut up a long time ago. I don't want to be coated in flour day and night. I don't want to own my own business; I have no desire to deal with all the 'extra' problems that go along with it.

Today, I read an interesting article about white-collar workers leaving their jobs for careers in the food industry. I think I should take down their names and see if they are willing to give the jobs they are leaving to me... Because I must be the last person in the world to NOT want to open up a cafe of my own. But maybe I'm just in the minority. Meanwhile, I continue to bake beautiful cupcakes that no one will buy but will never say 'no' for a bite.

I think anyone who loves to bake has a fleeting or long lasting image of themselves as the owner of a fabulous cupcake shop or bakery.

I have thought of it, but if it HAD to be done, I think it wuld lose its appeal ;)

The self doubt about leaving your job will pass, honest! :)

I would like my own business but not something that requires getting up for 5am every day! I love baking for pleasure and think it would become a chore very quickly if you had to do it - it is a comfort/relaxation thing for me.