I think there is a definite correlation between my present unemployment and frustration at being home and my insane desire to bake. It's like I'm nesting, but I'm not pregnant! LOL. I want to provide for my family, but in a different way than I am used to.. that is, not monetarily. Don't know what it is but baking definitely puts me in a better mood. Toward the middle of the day I was feeling in a funk.. I took a long walk... felt instantly better. And then I rushed into the kitchen to make herb and cream cheese cheddar biscuits... just because.

I actually do have a reason. After making the wraps today, I've realized, for the ten thousandth time, how awesome King Arthur is... the book, not the guy who pulled that sword out of the stone. :) And it is such a tome, it's almost a shame for me to only open the book once in a while. I must utilize it to its fullest potential.

My other reason for these specific biscuits reveals a bit of a trashiness about me. I love Red Lobster. There, I've said it. For those that don't know, Red Lobster is a chain 'seafood' restaurant (notice the seafood in quotes) where they serve you huge platefuls of things like popcorn shrimp and fried shrimp that tastes like coconut. Most things in Red Lobster are shrimps or fried, and usually both. You also get freefills of soft drinks (free refills), because, you understand, man can not survive on 8 ounces of coca cola alone! The BEST part of Red Lobster, though, are their Cheddar Bay Biscuits. I love these biscuits. I could eat a plateful of these biscuits. If I could do my wedding again, my cake would be one gigantic Red Lobster Cheddar Bay Biscuit. This love is serious, and it goes a long way. Perhaps more than 15 years, when my family, very rarely, went out to dinner, and we went to Red Lobster... after the Sizzler closed down.

So back to the biscuits, there are many copycat recipes on the Web, but I'm not really interested in that since most say to use Bisquick, which is a biscuit mix. I have no doubt that using the most artificialist of all ingredients would produce the most authentic of biscuits, but if I bother to get a box of Bisquick, I might as well just go to Red Lobster. If you're interested, here is a fellow food blogger's take on the Red Lobster copycat recipe. She does make them look quite scrummy!

So I thought I'd give these less authentic, and not artificial, biscuits a go.

You start by mixing up flour, cheddar cheese, dried thyme, chives (if you have it; I didn't), salt, a whole lot of baking powder and pepper. Into these dry ingredients, you cut in some cold cream cheese and butter. And then you add milk slowly to bind. The recipe called for 3/4 cup (about 180 ml) of milk, but I only ended up needing 1/2 cup (125 ml) before the dough came together beautifully enough to shape it.

And here is where I got clever. I have to admit that I am not the sharpest tool in the shed. I have very many dim moments when it comes to common sense.

And then I flipped the shaped dough onto cling film so I could cut the circles. 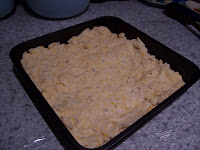 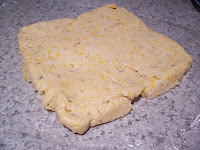 See the gorgeous specks of orange and green?

I've decided to freeze these for tomorrow's lunch. I'm planning on making a shrimp and broccoli fettucine meal, and I think these would go perfectly with them. King Arthur has a great tip regarding the freezing. They say that for biscuits and scones where the main ingredients are flour, baking powder, and some sort of fat, freezing actually means the end result will be lighter and flakier. This is because the solids in the dough end up freezing and remaining intact in the dough. When they are baked, they of course melt, but not as fast if they were just baked right after the dough was formed. They said it a lot more eloquently than me, though.

So the biscuits are now in the freezer.. ready to be baked soon. Until then... 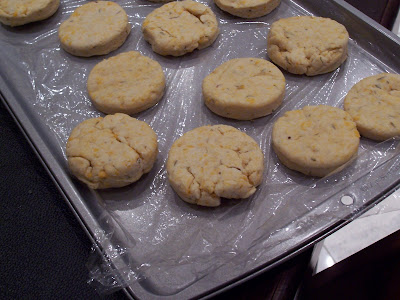 Wow, you have been really productive over the last couple of days!
I like the sound of these biscuits and also the wraps. I´ve never really "dared" to try it after a disasterous nan bread making, but now I might try baking flat things again :D
Looking forward to see the finished "product"!! :)

PS BTW, thanks for visiting and commenting my blog :)

I am also a little reluctant to admit my love for chaddar bay biscuits. They are melt in your mouth perfection, aren't they? I can't wait to see the end result of your baking these! And my need to purchase this King Arthur seems to grow each time I visit your blog! :)

They sound and look great. I'd love to try making them - if only so I can put my curiousity to rest about what biscuits actually are (slightly heavier than scones but not far off scones?)