Ode to My Alma Mater

As I get older, I find myself reminiscing a lot for my 'younger' days. In truth, I am not old. I don't say that to make people who think or feel old feel better about themselves -- I really am not old. But I have had defining moments in my life that are so far from the reality I am experiencing today, that I can't help but look back.

Going to Binghamton for my Bachelor's degree was one of them. I spent three years there, and I can't help but think now how simple it was all then. Instant friends. Instant social life. The ability to eat utter junk and still be able to fit into tight fitting bellbottom jeans and even tighter yellow vintage Star Wars baby tees. For the first couple of years I had one best friend; Sophia. She and I were inseparable. That's how it was back then. My whole life depended on the friendship of one person, and it made home, which was 4 hours away, not something I always felt the need to return to.

Sophia, Justin (her boyfriend at the time), and I used to drive over to a nearby outdoor shopping mall where there was a pizzeria we would love to frequent. Driving off-campus, especially in the beginning of our college career, was a BIG dea. I didn't drive; still don't. Sophia didn't have a car. But Justin did. It was awesome; the freedom. No one else we knew was living on-campus and had a car. Justin was from the probably smallest town in upstate New York, so the car came with him to school. He probably had it since he was old enough to drive. Sophia and I, city girls, were not really used to that sort of thing.

So, back to the food. As far as pizzas go, the pizzeria we went to wasn't that impressive. I mean, we were from Brooklyn. But, the baked ziti was awesome!! Most baked zitis I had known before then were full of ricotta and sauce. I didn't like ricotta then, and I didn't understand why it couldn't have been something as simple as sauce and mozzarella. Well, that's the kind of ziti this place had. Simple. Ziti. Spicy sauce. Mozzarella. It was awesome. We would always get it, and would sit in one of the booths eating the ziti out of aluminum containers. College. It was awesome.

So, I recreated it at home.

To make the sauce spicy, I used my homemade chili oil, a recipe by Giada De Laurentiis. I've also made her Fiery Angel Hair Pasta using this oil, and it is fantastic!! 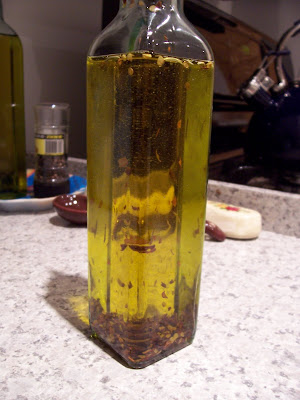 The sauce was pretty simple to make and it didn't really need a recipe. I just lightly colored some garlic in the chili oil, and then added whole plum tomatoes in their juice from a can. I crushed the tomatoes gently as they cooked and simmered the sauce away. The longer it sits, the better. Yum!

Then I just boiled up some ziti, and I kind of layered the cooked pasta and sauce and grated cheese like you would a lasagna. Sauce, pasta, cheese, repeat. This was baked until the cheese was melted and showed some brown spots in place, and it was ready. 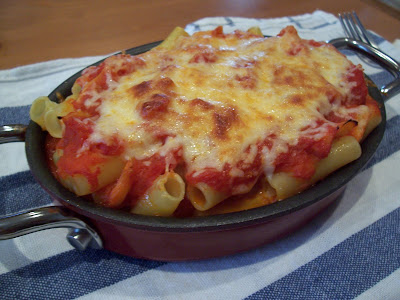 It came out delicious. Definitely happy I recreated it at home, as it really brought me back to those carefree days.