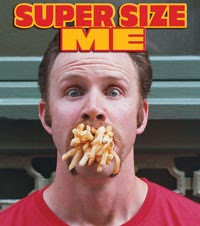 One of the benefits of having a job that will pay you to do nothing all day is the chance to see movies you never knew you wanted to see, until they were available free online. Supersize Me is one of those movies. When it came out, there was a lot of hype behind it, and I thought it was just a drastic, and probably gross attempt, to disgust everyone enough to never go into another fast food restaurant. Not to get all political, but I don't believe in this going-to-extremes malarkey. I am a moderate. I don't see things one way and I don't see things the other way. I think there are arguments for both sides, and when someone tries to sell me their opinion, I look the other way because sometimes I think people enjoy hearing their voice more than they care about getting their points across.

So, no, I don't think that fast food should be in someone's daily intake, or even weekly, but I also don't think that you should never eat the stuff. If we talk in terms of fat, calories, and sugar, then homemade stuff could be just as bad for you.

So, I watched this movie at first with a grain of salt, because I really had nothing else to do. And surprisingly, I quite liked it. It was well thought out, very informative, and the director/McDonald's supersizer was actually quite charming and funny. I didn't get grossed out as I thought I would, and was actually craving a crispy chicken sandwich for a while afterwards!

I also learned a lot of the things from the health info. I have been down about my expanding waist for a while now. I used to be one of those really skinny kids, and even in my early 20s, a size 2 and 4. Now I don't even recognize myself in pictures, and I admit I have let myself go. But I don't eat McDonalds that often. I don't binge on ice cream at home. I got fat because I stopped being active, because I started baking more, because I stopped believing I could be skinny again. Because because because. Morgan, the supersizer, went to a few doctors and a nutritionist for his documentary, and I really learned what makes one fat. Obviously, it's eating fatty foods. But, it's also eating sugar. I tend to not go overboard on desserts and candy. Once I'm satisfied, I can pretty much stop. When Morgan's nutritionist was freaking out and telling him he really needs to stop doing what he is doing, she suggested he cut out soft drinks, at least, if he insisted on finishing this 30-day binge on fast food. She said, 'don't drink your calories!'. A lightbulb went off in my head. Of course! I worry about eating fatty food and eating fried food and eating cake and candy, but when do I really look down on myself every time I buy a Pepsi? Sugar turns to fat. Duh, Ilana!!!

So since watching the movie I have made a great effort to not buy Pepsi during my lunch break. I'm doing well. Drinking water. From what I recall, I last had a Pepsi last Friday. So, it's been 5 days, and I'm not all jittery, like I usually am when I go off Pepsi. Maybe I could keep this up.

So, I definitely think you should watch this movie. Not because you think McDonald's should be sued for everything they got (I don't; people are fat because of people. We need to take responsibility for our own actions), or because you think fast food is the devil's spawn (like Morgan's incense-burning/quorn-eating vegan girlfriend), or because you get off watching someone eat as much as they want of something when it is something you deny yourself every day. Watch it because it's smart. Because it gives health info. And if you're like me, and you really don't know why you're as fat as you are, then this film will explain why.

So since I'm doing well with the no Pepsi thang, I thought I'd reward myself.... just this once! 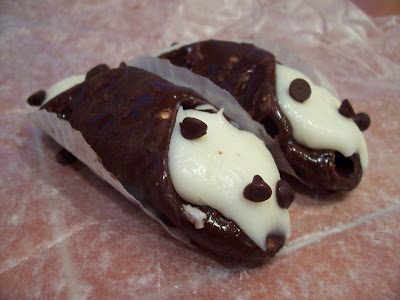 Look, I live in Italian neighborhood. And I probably won't for long. I can't live here and not have at least one cannoli. Mmmmmmmm. I washed one down with a glass of 1% milk. Progress!

Oh yum Ilana those look delicious, I am on a major cut back at the moments - must stop viewing butter as a necessary cooking aid!

Anyway, I really enjoyed Supersize me and like you believe people need to start taking responsibility for themselves rather than blaming all of the big corporations. I forget about sugar in drinks all the time and have to remember to ask for slimline tonic for my G & T and think carefully before deciding to drink a pink rather than the slimline G & T!

I'm with you in this: I don't think eating fast food once in a blue moon is so unhealthy, but certainly it's not something I do every month. I do crave a cheeseburger about once a year and I'm fine with that.
As for drinking the calories, I know that's what they say, but experience hasn't taught me that! I used to drink lots of fizzy drinks when I was a teen and at uni. I cut down seriously to about half litre/week and still I'm +10kg compared to that weight, eeek! Or maybe I should be horrified where I'd be if I hadn't quit drinking those? LOL

I've tagged you, hope you can join in. Instructions on my blog.

You won't be living there long? Where are you going ?!

Oh, Ilana, I'm on a diet, those cannoli are killing me, chocolate ones too, you're so cruel!

I saw the movie in the cinema a while ago (2, 3 years?). Informative and enjoyable, but not so well made I thought. Anyway, I also believe in the "don't drink your calories" bit, but I never have so that's my luck, I put on weight because of things like cannoli!