The cod that never showed up. (Part 1)

Moving into a new neighborhood is like starting a new relationship. In theory, it's all exciting and you know there will be many new things to discover, but in practice, you learn that your commute is not any easier, that there are no good pizzerias to speak of, and that getting your basic fruit, veg, meat and fish is a bitch! I live in Dyker Heights, and one neighborhood covers a lot of area. So even if one block is chock full of gourmet stores, another has nada, or if it does have something, stores are usually closed by 5pm or decide to close completely, and unexpectedly.

I think my neighbors of Dyker Heights run into the same predicament as me when it comes to where to shop. Since there are only two huge fruit and vegetable stores, they are of course always packed, any time of day, any day of the week. I am not sure why they are the only grocery stores for the neighborhood. We do live relatively near Chinatown in Sunset Park, but anyone that knows New York knows that 'relatively near' is not necessarily that close. Maybe that's why there aren't that many stores in my 'hood. Maybe everybody goes shopping in Chinatown. Well, Chinatown is too far to go to on the cold days we have been having. Next to one of the big fruit stores was a Chinese supermarket, though, and it had fish and meat. I thought that could be my standby until the weather got better.

Well, last night I wanted to finally make a cod dish that is in How to Eat, and even though I wasn't feeling very well and it was raining, I didn't want to put it off any longer. So, I went to the store, which was out of my way. The store was closed -- for good! I don't get how the only meat and fish store for blocks and blocks could close down but I just had a feeling at that point that I wasn't meant to be making this cod dish, not for a while.

I came home deflated and tired. Takeout seemed like the viable option, but we are watching our pennies. Instead, I turned to a recipe I have had my eye on a while, but never made it because I wasn't in a 'salad' mode. The recipe serves 4, but I more or less quartered it for myself (Rafa had a chorizo omelette). Also, I couldn't imagine poaching four eggs. 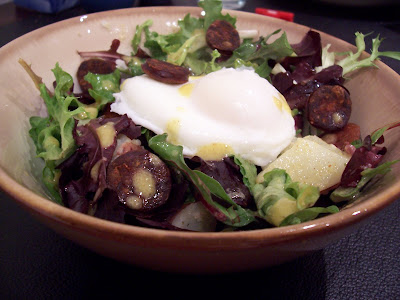 So, it's basically a salad of mixed leaves (though the original called for watercress) mixed in a mustardy vinaigrette with boiled potatoes (I used small, red ones). A poached egg is added on top, along with some fried chorizo pieces (the recipe called for bacon, but I think these worked better) and the rest of the dressing. This was fantastic; I literally inhaled it. I'm so glad I decided to not be lazy and actually try something I have been meaning to for a while...

Now I have to see about that cod!

Hope you are feeling better now :)

Your salad looks great, the chorizo you get is totally different to what I can buy here, mine is quite orange.

Chorizo and runny poached egg, how lovely does that sound? I came to chorizo only a couple of years ago, when the shops started to stock it regularly, but I think I'm addicted now...