Rosie would be proud -- and so would Tom N-D.

I think I ran out of steam on my Tom N-D project shortly after I felt like I exhausted all my stir-fry avenues. I was getting sick of chopping and soy sauce and boiling rice. I just couldn't do it anymore. Having Rosemary bring the stir-fry ingredients a couple of weeks ago showed me the greatness of wok action yet again.

Rafa and I only had a couple of hours together yesterday, but I thought I'd at least feed us, something which I haven't done in a very long time. Our collection of take-out menus is growing, by the way. I took out some pork chops to defrost and flipped through the Healthy Eating supplement Delicious included in their February 2007 issue. There was a recipe for Fast Asian Fish, but I didn't have fish in the house. The good news was that I did have the condiments, and at least some veggies to work with too.

So I marinated the pork for only an hour in soy sauce, sweet chilli sauce, garlic and ginger. The chilli sauce was spicier than I had thought, so my thoughts of just grilling the pork went out the window. Instead, I just cut up the pork into thin pieces, a la Rosemary's stir-fried beef, and also chopped up some red pepper, a carrot and a couple of spring onions. I used Rosemary's technique for doing the stir-fry. Frying the pork first, then setting aside. Then, I added the chopped veggies -- when they were getting close to soft, I returned the pork to the pan, heated it through, with a dollop of soy and hoisin sauces, and served it up. Of course, I did make some rice to go with it; thankfully, I've overcome my disdain for it.

The stir-fry turned out fabulous!!! 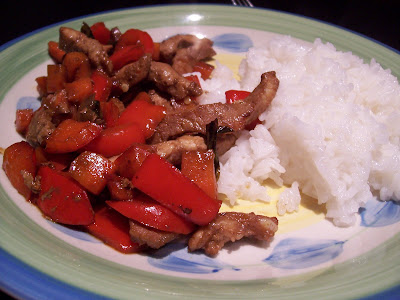 Lovely and flavorful, and the red pepper and carrots were a wonderful addition. I'm so happy I was able to come up with this. In recent months, I have found that I do experiment more often, and with only using a recipe as a guide, I can really do it myself. Yay, me!

That looks delicious! I am finding that blogging is helping my confidence with small adjustments to recipes so it can only be time before I start being a bit braver in my attempts!

Mmmm, I love stir-fries. This one looks lovely - it is so aesthetic, with the red versus the white rice.

Glad you've got your mojo back!