I think this qualifies as an emergency... 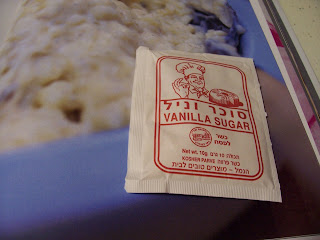 I was scraping the bottom of the barrel last night for dinner. I feel like one of those drifters that never eats meals at the appropriate time, and can live on cereal and bananas, as long as they have to. Basically, food is the last thing on my mind now with the last packing to be taken care of.. It's ridiculous. I mean, how much shit can two young people accumulate in 4 years?? It is mind-boggling. I always thought moving was a fun activity. Of course, I always saw it at a distance, as I never had to really move with 'stuff' before.

But at the risk of passing out last night from malnutrition, I figured I needed to make 'something'. This was really an emergency, LOL.

So here's where the ewww-factor comes in. I had a can of evaporated milk in the bottom of my coat closet for a while now. By 'a while', I mean 'a while'. Less than four years but probably more than two. My father used to drive old people to get "gove'ment cheez" and he often was given the canned stuff they didn't want. So, I have inherited this said can of evaporated milk, a can of bartlett pears, and two cans of stewed tomatoes.

Somewhere in the back of my mind I was thinking of Nigella's rice pudding from Nigella Bites, for some reason. I have never tried it, but really like the cold Spanish version of arroz con leche. Rafa's best friend's mother (ha, figure that one out!) makes a mean arroz con leche. I knew that Nigella's would be creamier and obviously eaten warm, but there was that can of evaporated milk and not much else on my shelves or fridge.

I am not sure if evaporated milk goes bad. See, it was creamy, but the Internet said it would be since the water was taken out of it. It didn't smell bad but had an interesting marigold kind of color. I decided to just go ahead with it, since the small amount of risotto rice I had would have to be thrown away eventually.

Making the rice pudding is basically making a sweetened risotto. You melt some butter with vanilla sugar (love that vanilla sugar!) in a pan, add the rice, and then add ladlefuls of hot milk. It took a bit longer to get to the chewy consistency, but it wasn't a very long time. And it came out looking like this... 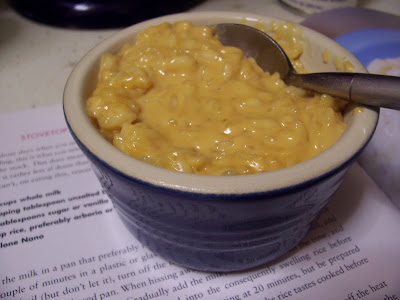 Quite pretty, albeit a little orange. I tasted it; it was nice. And then I detected a slight sourness, and my stomach started feeling funny. I decided that by making this Stovetop Rice Pudding for Emergencies, I may end up in the emergency room, so I stopped eating and threw the rest away. Usually, I feel really guilty about wasting food, but the ingredients would have been binned eventually. We will try to move the rest of our stuff this Sunday.

So as a lesson to you all out there, sometimes, you just gotta let go of those last cans of food.