I've been keen to try out some more new recipes from the many Internet printouts I have. Tonight's 'experiment' was from the New York Times; Spiced Meat Pies (Lahmejun). This recipe came from an article back in October of the Sephardic Jewish women of Brooklyn.

These women, mostly in their twenties, are keeping the culinary traditions alive in their family and cooking recipes that have been passed on by their mothers and mothers-in-law, and their mothers before them.

Lahmejun is a Middle-Eastern meat pie. Since I didn't want to make little pies, I decided to make the recipe as a square pizza.

The dough was a pleasure to make. It was a bit on the soft side, but after the Minimalist Loaf, I could handle it! The meat mixture was also a doddle... I got to finally use my tamarind paste again, I so love this! Since I didn't have any lemons, I substituted the juice with a little bit of balsamic vinegar.

Here's how it turned out... 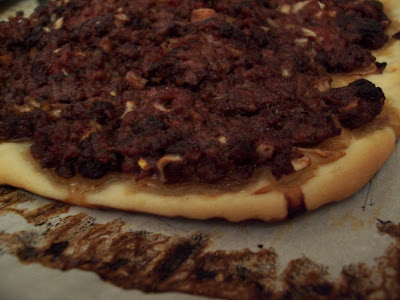 It turned out really nice, but we both thought that it was a bit too sour. Perhaps the tamarind was a bit too strong. It's the kind of pie where you want to have little bites, maybe as appetizers, and then move on to a bigger dinner. The type of food that you wanted to have a glass of water next to you. It was okay, but not something I'd probably make again.

Now I'm starting to think that 'experimenting' means getting a lot of disappointments. Even with the recipes that have worked, I still think the majority of the recipes I have really loved have been in cookbooks. Not sure why that is; perhaps they have been tasted more. Or, it could be, the cookbooks I have have the recipes I would want to make in the first place. My printouts are kind of a hodgepodge. Hmmmn. Well even though this was not a hit with the mister and missus, perhaps it will be a welcome addition to your family table.

Adapted
from Iris Towers
Time: About 45 minutes plus one hour’s rising

1. To make
dough: Combine yeast and 2 tablespoons warm water and set aside for 5 minutes.
Combine flour and salt in a large bowl; add oil, yeast mixture and a scant ½ cup warm water. Mix, using hands if necessary, until dough comes together: it should be elastic but not sticky. If needed, add a little more flour or water. Turn out onto a board (no need to flour it) and knead until soft and smooth, about 10 minutes. Transfer to a bowl, cover and let rise in a warm place 1 hour.

2. When dough has risen, combine all ingredients for topping in a bowl. Divide dough in two and roll out on a floured surface to about 1/8-inch thickness. Cut 3-inch rounds with a water glass or cookie cutter, stacking them between layers of wax paper. Roll and cut remaining dough.

3. Preheat oven to 400 degrees. Spread a heaping tablespoon of meat mixture on each dough round, spreading all the way to the edge: meat mixture will shrink during baking. (Once assembled, pies can be frozen, stacked in wax paper, and then baked directly from freezer.) Arrange pies on 2 lightly oiled baking sheets.
Bake 20 minutes, rotating pans halfway through baking. Serve hot, sprinkled with lemon juice and coarse salt.

That looks delicious! Such a shame it was a bit too tamarindy. Still, some experiments work out fantastically, so keep trying, and we can all benefit. I am sort of restricted to Jamie at the mo, but enjoying it anyway - he seems more reliable than most!