Working through the pile...

The Internet at work is a dangerous thing. I find myself with chunks of time and often going into foodie websites. My favorites include the Dining section in the New York Times and also Simply Recipes. Before I know it, I have a pile of recipes I have printed off (with my office color printer, natch) and no idea what to do with them.

There really aren't enough hours in the day for a foodie. The Internet, expansive as it is, is only one avenue in which to go down if one were to find recipes. And let's face it, everything looks good! You'd think that with all the recipes out there, all the combinations of ingredients would have been taken care of by now, but after the variations of the variations, we end up with new recipes and no time to do them. It is a bit overwhelming, I admit. I guess that is why I have never been a cookbook hoarder. Apart from the obvious reasons, like I have no money and no space, having too many cookbooks would make me even more mental than I already am. With too much choice, I end up making nothing.

So I limit myself with these choices:

This weekend, I am proud to say, I have managed to dig into my pile of printouts and make a recipe I have been curious about since last Summer.

I've never had Persian food, at least I don't think so, so I wasn't sure what to except. But looking at the list of ingredients, these were all things I like already -- especially the fried chicken bit.

1. In a small bowl, combine saffron with 1 tablespoon water and let soak 10 minutes. Place in food processor with yogurt and garlic and purée until smooth and yellow. Place chicken in glass or ceramic bowl; pour yogurt mixture on top, turn to coat; cover and refrigerate at least 3 hours or overnight.
2. In a medium bowl, combine flour, paprika, mint, salt and pepper. Heat a generous half-inch oil in a deep skillet over medium heat. Drop in a bit of bread to test temperature; oil should bubble vigorously. Working in batches to avoid crowding, dredge chicken pieces in flour mixture, then fry until golden brown on both sides, about 7 minutes a side. Remove and drain on paper towels.
3. Sprinkle with salt and serve immediately, topped with walnuts and lemon wedges.

I used the recipe as a guide. It seems that the last several months I have been bold and gone my own direction with recipes. It feels good to make it my own.

Instead of blitzing the ingredients for the marinade, I just mixed it all together in a ceramic bowl. The marinade was a gorgeous yellowy color -- and it smelled fabulous too. Since I quite like schnitzel, I used boneless, skinless chicken breast. 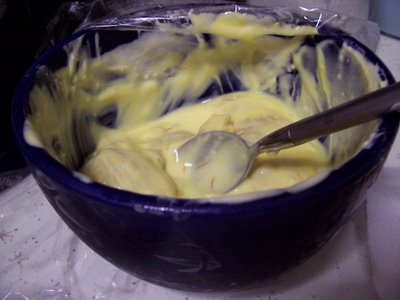 The flour mixture was also done my way -- by eye. I really didn't feel like dirtying spoons and such, so just measured out by what I thought would be the right amount.

The result was spectacular. The flour almost turned into a shell, encasing the moist chicken underneath. Even though this was skinless meat, it felt as if there was a second skin to it -- a lovely and crunchy one at that! The flavors of the marinade - the tanginess of the yogurt and the musky warmth of saffron came through as well. So is this Persian, I don't know. But it ain't half bad! 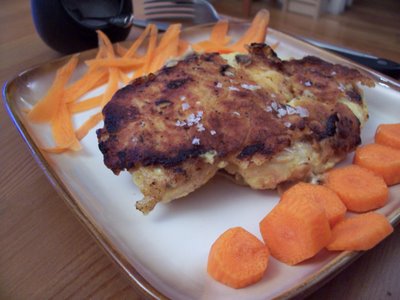 Rafa really enjoyed this too. He called it 'excellent', and in true foodie fashion, I wrote down his remark so that when I return to this recipe I'll remember that we both gave it a 10 out of 10.