I don't consider myself to be a great bread baker. Although most of my results exceed other's expectations, I still have that feeling that it would be better at a bakery. I think breadmaking is the only place where I judge myself so harshly. Bakery cakes suck, usually, and when I go out to dinner at some places, I think that I could probably make it better at home. But, bakery bread, especially in New York, is something else entirely.

I have never been one to go to bakeries often but one by my job (Sullivan Street Bakery) is just exceptional. I usually get their cold pizzas there. It's the only place that you could actually get a freshly baked pizza for $1 -- the pizza bianco, it's like a huge airy focaccia -- glistening with olive oil and kissed with the unmistakable gorgeousness that is rosemary. The fact that it is huge and that you only pay a buck for it is quite a thing already. What makes it amazing is that it's delicious too!

I've mentioned this bakery before, in my other blog, and now, even though it is still on Sullivan Street, the name has been changed to Grandaisy Bakery. I find that to be a bullshit name and it doesn't capture the essence of the bakery at all, so I will continue to refer to it as Sullivan St. Bakery.

Following along with getting through my recipes pile, I printed out an article from last Wednesday's NY Times Dining section that has Mark Bittman, 'The Minimalist', having a cooking session with the owner of Sullivan St., Jim Lahey. Jim owns the uptown location of the bakery. He shares with Bittman, and with the rest of the NY Times reading public, the recipe for his bread. It is not made clear what kind of bread it is, but apparently it is a technique he uses in his bakery. And, this bread is easy to make. As Lahey says, and I'm paraphrasing, an eight-year old could do it. Of course, I'm thinking, what's the catch? Here's this fantastic bread, presumably (I've only ever had Sullivan's ciabatta bread), and it is an easy peasy operation.

So, I decided to try this recipe out with some friends. The recipe for the bread is in this post.

So kneadless (ha!) to say, this recipe takes time. But it is mostly waiting time -- that's not the kind I like. I am very impatient and tend to be a bit of a control freak so I am not sure if the minimalist way of cooking is for me. I'm high maintenance, big time.

The crust and crunch of this bread, Lahey points out, is due to the long rising time and no kneading. Both sound like simple things, but I think Lahey was overestimating the ability of non-trained bakers like me. He says that an eight-year old can make this loaf. I think this is the catch. A eight-year old can make this loaf, and get him/herself crazy dirty in the process, and probably not even care. But I don't know most adults that would feel the same. The dough is not workable, beyond any stretch (ha!) of the imagination. I mean, really really not workable. I saw the video of Lahey making this with Bittman before I embarked on my sticky adventure, and while making the dough, or rather sweating my way through it, I was thinking, "WTF!". Yeah, of course Lahey can fold the dough onto itself and then shape it in a ball -- that's what he does for a living! 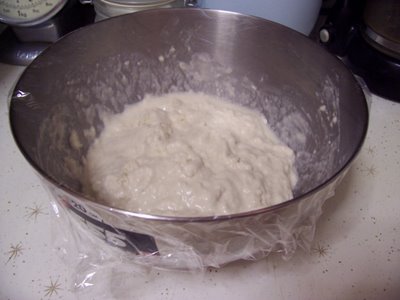 My dough was sticky and soft no matter what I did to help it along. I panicked and thought my final result was a disaster, and this was not helped by my nerves. But, I soldiered on. So what if it was a waste? I used 3 cups of flour and barely any yeast; I spent hours that I didn't mind spending because it was the weekend and it was raining and I had nothing else to do.

I was thinking all of this, and then the results came... the bread was PERFECT.

I don't know how I did it, but the bread was seriously the same or even better than the ciabatta at Sullivan Street. I couldn't believe it, SUCCESS! 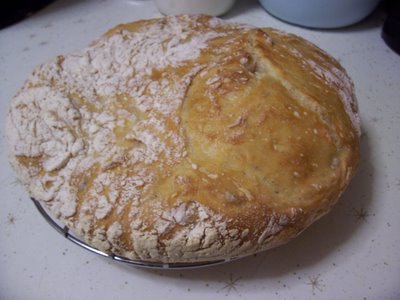 And just to compare here's my bread, cut open... 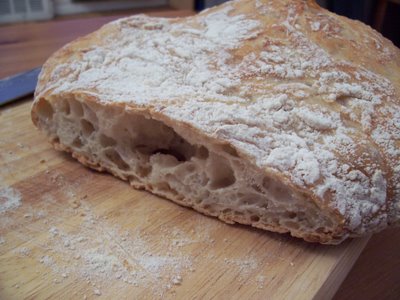 And here's a Sullivan Street ciabatta loaf -- they could be brothers! 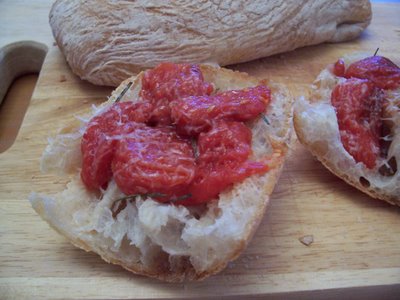 The crust is crunchy but the inside is full of glorious holes and is so soft, you wouldn't even believe it.

My dad is always saying that my bread, although good, never has the crunch that you'd expect from bread. I told him that this is not possible because I have neither a steam oven or brick-oven. But I was wrong. The secret to bakery bread is no-kneading, a long rest, a wet dough, and the intense heat the dough undergoes by being baked in a pot.

After tasting the bread, I quickly called my parents to see what they were up to. They had to taste this bread! Luckily, they were on their way home. I gave them a generous portion of the bread and waited for the phonecall. It came about 45 minutes later -- my dad said he will never buy bread again, that it was the best bread I've ever baked! This morning, my mom called me to tell me my dad was cross with her because she took their last slice to work. I expect my dad will want me to bake him this bread every week now. I didn't have the heart to tell him that this dough caused so many nerves, and if I were to make this bread again I would seriously need to get a grip, and buy an enamel pot! Hehe. My non-stick stock pot is not looking its best. It's only the cosmetic features outside, but I'm a bit anal when it comes to these things...

So for now I'll take my triumph and be happy with it. All I wanted was a nice loaf of bread, and it exceeded my expectations!

This is fabulous. I will be back to read in lebgth...thanks

Ilana, this no-knead bread looks fantastic! I'd really love to give it a try - maybe next weekend!
Thank you again for sharing : )
you're a great source of inspiration to me!

Mmm... it looks delicious... I am just getting into bread-baking by hand (I usually use a breadmaker). Maybe I will try this one - it certainly looks great!
Kathryn x

Ilana, I decided to give it a try as you made it sound so easy. And it really is! I got a bakery quality loaf with very little effort. Amazing! Thank you.

I have missed seeing you around girlie
xx

Hey, maybe you can call me next time for a generous helping?

Check out egullet.org. There is an entire thread( 7 pages) devoted to this article. A lot of ppl have tweaked the recipe to make it more flavorful.

Randi, thanks I breezed through it just now. Seems this was a hot topic on lots of food blogs as well.

Sis, sorry, but Dad got first dibs since he is always saying my bread is not 'bready' enough.

Everyone, I really urge you all to give this a go.

I am on my sixth loaf! I created a web page to document my methods - My Bread - the best bread I have ever made!

Hey thank you! Coincidentally I am on my second dough! I will certainly use your tips re the parchment paper and the foil on the handle! Genius! When I blog about my second loaf, I'll include a link to your blog post.