I was in need of some mother-daughter bonding today since it seems like ages since I have spent time at my parent's place. My mother has been promising to show me how to make chicken soup, so I made her stick to her word this afternoon. Plus, I was need of some cocker spaniel cuddling -- look at that boobalicious hunk of gorgeous canine. Mmmmm. 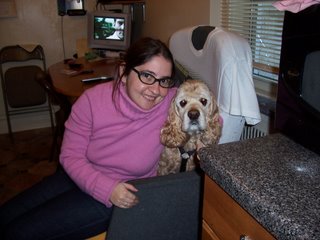 So, back to the soup, well I was thinking a lot of what Tom Norrington-Davies says in his Risotto chapter in Cupboard Love. He emphasizes that a good risotto comes from fresh ingredients, including real stock. If I was going to be a serious risotto cook, I would also need to take the process seriously.

For the last couple of weeks I have been getting some really good advice about how to make proper chicken stock. But, one thing always stopped me from setting out on my own to making it. I knew there was one chicken soup that was the best -- and this is Mom's. She doesn't make it often. Usually we get it on the big holidays -- it usually breaks our Yom Kippur fast, and we always have it with matzah balls on Passover. But it's not an everyday thing -- especially since I moved out of my parent's place eight years ago!

I'm sure other recipes would have been lovely, but really, I wanted to make Mom's chicken soup.

So that's how the cooking together came to be... And now, the soup.

My mom was lovely enough to pick up the ingredients so we could make this together today. She got two organic chicken leg quarters. I was surprised she went organic -- we're not that type of family, but she said it tastes better, so there you go. 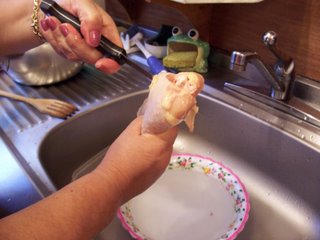 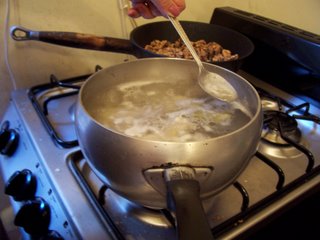 So my mom cut the two quarters into two thighs and two drumsticks (above) and added them to a pot. She filled the pot with water to cover the chicken. She put the heat on and the lid, and we let it sit there until it started boiling. At that point, I was on removing-scum duty. It was challenging at first, but then I got the hang of it.

The vegetables went in next. My mom (below) cut a cross at the top of a peeled onion -- enough for it to be able to release its juices but not so much that we had four quarters. We also added a peeled parsnip and carrot. 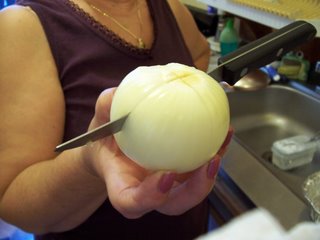 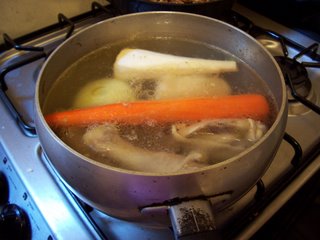 Woohoo, the soup was really taking shape... And then something interesting happened. Have people seen the Friends episode where Phoebe discovers that her grandmother's famous chocolate chip cookies were actually from the Toll House Cookie recipe? Well, when my mom's soup was happily boiling away, she said that at this point is where you add the vegeta. Huh, vegeta?! I knew what that was; it's basically a powder chicken bouillon cube. So stock purists, look away, we put a teaspoon of vegeta in our boiling stock.

We put the lid on and let this simmer for about 40 minutes, and then we put in the final addition of dill. Notice how my mom tied a string around the dill; this is so that its flavor would permeate the soup, but you wouldn't have green specks floating all over the soup. 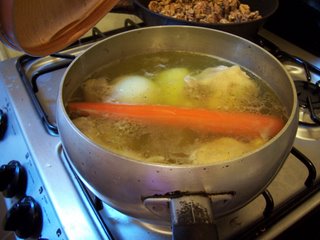 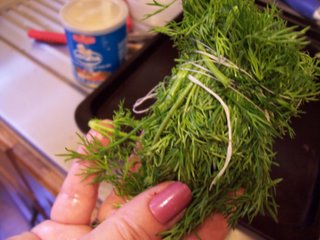 After the dill was added, the soup was basically done. It was left to sit on the hob, covered, for a few minutes. I had a bit of a taste test at this point... Delicious! 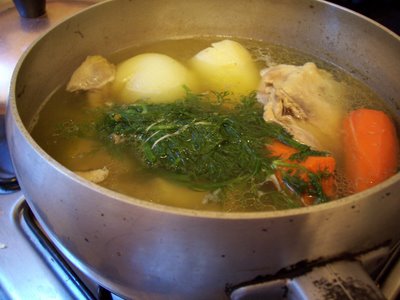 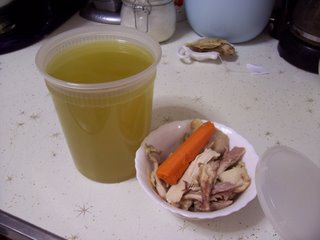 Once the soup sits for a bit, then it is time to strain it and to keep the things you want for gorgeous warming soups.

We kept the chicken and the carrot. We gave the parsnip to my dad and chucked the rest of the vegetables.

I was so chuffed. I had almost a liter of gorgeous golden soup. So what if the 'golden' was helped a bit. Shhhh, don't tell Tom.

I can use the stock to make some chicken soup for Rafa, and I hope to have some left for a risotto tomorrow. We shall see. Now that I have the confidence to make my own stock, there's no stopping me. But, I have to admit, it was so much better to be taught by my idol.

The mother-daughter cooking session did not end there, however. My mother was in the process of making her special Roses. She said she was inspired to make them because she saw them being sold at a ridiculously expensive price at a Russian store she frequents. Ah, does that sound familiar? The apple, indeed, does not fall from the tree.

These are delightful little cookies shaped like, well, roses. We ate them as kids in Israel, and I am happy my mom is still making them. They are fab!

My mom made the dough for the cookies last night -- she said there were egg yolks, sour cream, sugar, lemon juice, flour and baking soda. It was a gorgeous dough. I had a go at rolling it out into a rectangle. Then I spread the dough with a meringue my mom made -- egg whites with sugar, beaten until gloriously shiny. 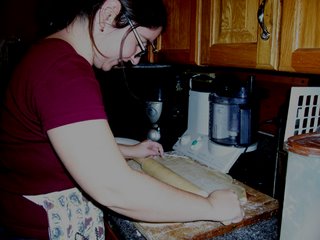 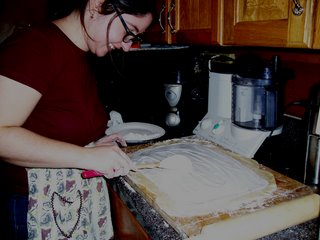 For the batch we were making for me and Rafa, we didn't include nuts, but for the second and third batches, we added chopped roasted walnuts. Here is my mom rolling the dough like a swiss roll. Then, the log is cut with a sharp knife to produce these gorgeous roses. The roses went on the cookie sheet cut side down. 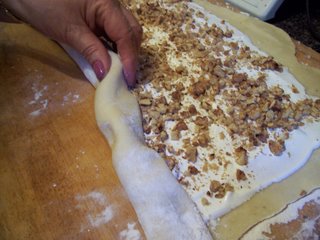 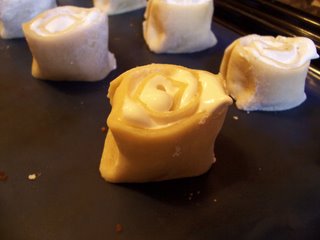 These are just so, so good. The outside is crunchy, but the inner layers are so soft and doughy. The meringue swirls add just the right hint of sweetness. Great cookies to eat with coffee and tea, or with anything really. 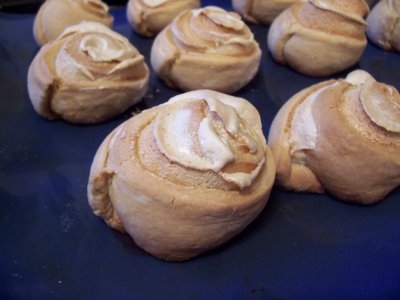 My mom was shy for me to take pictures of her... she is one special lady. Comforting and snuggable. I didn't want to get all emotional with her while cooking, but I wanted to tell her that the reason I wanted to take pictures of this 'moment' was because I wanted to keep it inside me forever. I want to remember this day -- forever. And after many years have gone by, I'll still have this page, I'll still have my memory. My mind won't let me forget.

Oooh! Ilana! What a magical day!

And I must say... I *need* that recipe for those roses!

Ilana, really loved this report! You surely had a great time... i could never cook with my mom just because we'd argue on everything - i'm right, you're worng, you have to do like this... i cannot really stand it!!

Hi, Fi. I will try to get that recipe for you. My mom is more difficult to schedule meetings with than the President. LOL.
Claudia, you know it really depends. My mom can be very set in her ways too; I don't let her tell me how to make something I know how to do. But since her field is really into pastry and these types of things, I let her take the reins.

So it's a learning experience for me....

This whole post is just so sweet. Your mom sounds like a star. Mine is too, but she isn't into cooking at all.
Those roses look divine!

Hi Ilana, yes please get the recipe for these, I love the look of these gorgeous biscuits/cookies, they're so pretty! I would love to try and replicate them!
Freya

What a lovely post! I wanna see a pic of your Mom too!!

Hi! I want to make these to take to our family Thanksgiving. Do you think they will hold up to a day's travel and not get stale? In other words how do I store them and keep them fresh for several days? Thanks to you and your Mom for this delicious looking recipe! Loved hearing about your day in the kitchen with your Mom!

Hi, Jan.
These made a day in advance are no problem whatsoever. Wait for them to cool completely, wrap an entire batch or however many you want to take in foil, and then put in tupperware. Mine held up really well for about two to three days in tupperware, which is how quickly it took for it to be devoured.

Have a great Thanksgiving,
Ilana

Wow, those last words are so sweet!...and your Mom's roses look fantastic!