I was debating what to call this post because the beginning of the day was so different than the end of my day. The good news is that it started out badly but ended up being pretty great.

So let me start at the beginning...
After living in New York for more than 22 years I have kind of developed a thick skin. People will be nasty to you for no reason. This is truly evident on the subway. I feel like our subway is a kind of bubble. In it, everyone's true personality comes out. The gloves are off; this is who you are.
I take a B train, and it is one of those where all the seats are up against the windows. One long bench, if you will. A bench holds six average-sized adults. Everyone knows this. I entered the B train on my way to work to find a bench with five adults. There was a little room on both sides of a lady I had never seen before. (After taking the same train, more or less, in the morning, there is usually a repeating cast of characters.) As politely as I could, I asked her and the gentleman next to her to scoot over. The man moved a bit, but the woman, well, she blatantly ignored me. She looked right in my eyes with a blank stare. She refused to nudge. It was Monday morning and I was pissed off already, so this was really nothing I needed to deal with. So, with the same blank expression this woman was giving me, I in turn pushed my huge ass between her and the gentleman. Of course, I made apologies. "Oh sorry." But, I was not sorry. If the bitch couldn't move two inches, well, yes, she will get trampled by my huge ass, and yes, she does deserve it. The entire ride she made it her business to ensure I would not be comfortable, not moving an inch, so I had to be really squeezed in. I should mention that it's getting quite cold here at the moment, so being squished with a down jacket on is not fun.
So, why are people like this? I mean, I know that it is not about me. It is them. They have the problem; they have a crappy life and thus feel the need to make everybody else unhappy. But, really, all I asked her was to move two inches. That would mean she would have to sit just a tad bit closer to her neighbor. Is that so bad? You take the subway, lady, of course you'll end up being uncomfortably close to someone you never met. Ah..... mornings.
The rest of the day at work was okay. It was actually pretty uneventful. I often say that a monkey could do my job, but thinking about it now, I think that is an insult to the monkey's intelligence. :)
What I was most looking forward to was my dinner date with my friend, Elana. Yes, a Monday night out! I love going out on weekdays. Makes me feel like I'm not chained to my desk; that I have a life apart from these four walls.
We met up at Union Square Greenmarket - a sort of farmer's market - and had dinner at a place I have mentioned before in my other blog, Havana Central. 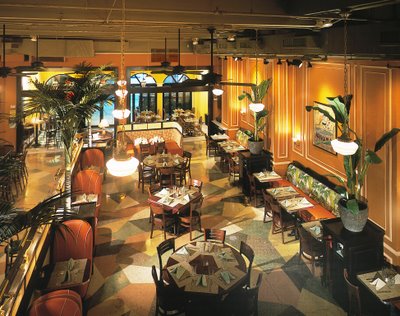 It's a Cuban joint - close to authentic. I had a fantastic herb-rubbed half chicken. I wasn't sure what to expect because my last experience there wasn't that great. But, the chicken was melt-in-your-mouth delicious. You don't usually say that about white meat, but this chicken was cooked to perfection. We shared their boniatos fritos; sweet potato fries. So yum!! I also can recommend their zesty corn-on-the-cob. It is kind of creamy and spicy and crunchy all at once. For drinks, I had a mojito. That is so unlike me; I hardly ever drink. But, I figured, why not. It was a strawberry mojito -- mmmmm. The fresito was sweet and minty, loved it!
After dinner, we walked a few steps to a new Argentinian chain bakery - Tisserie. 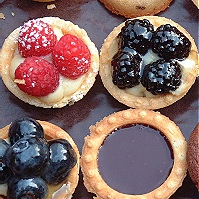 It's the type of place with miniature little tartlets and truffles. Pastries galore. It's not my usual thing as I don't eat 'cute', but after stuffing myself on dinner a little itty bitty dessert wouldn't hurt. We sampled a nutella tart, a dulce de leche tart, a chocolate diamond, and a tiger eye. The tarts speak for themselves, and the chocolate diamond was like a buttery chocolate cookie. The tiger eye was a small semolina-ish/almond-ish soft cookie with a chocolate button in the middle.
I love hanging out with Elana. She sees me as I am. We have known each other for almost eight years now, so there are no pretenses. She knows I have been, and still could be, a bad friend at times. She has seen me disappear and come back again. But, she has always been there. Always encouraging, always wishing me the best in life. We're both foodies, even though neither of us started out that way in our friendship. We often talk about that if it was our way, this bakery would do this or that. We both thought the fillings for the tarts were great, but the tart shells were way too hard. The chocolate diamond was blah - too buttery to be considered really chocolatey. The tiger eye was okay, but Elana didn't like it.
So a really great end to a day that didn't start off that way. Sometimes it's just important to focus on the things that are great, and pay no mind to the things that just aren't.

Ilana, it looks gorgeous! I wish I were in NY. I love the idea of Cuban food and the place looks great, relaxed and fun.