The weather is crap here. I try not to start off posts with a weather report, but it really does affect my mood and what I feel like cooking and eating. I've been craving a Spanish omelette for ages now. Sadly, our favorite gaucha sauce that accompanies the tortilla is no more; we are out of supplies!! However, being gaucha-less doesn't seem to curb my tortilla wants, in fact it makes me want it more!

I wanted to make the simplest Tortilla Española I could find. No long frying; no boiling of potatoes. I had looked in a book Rafa and I have co-owned for a long time now; Robert Carrier's Great Dishes of Spain. 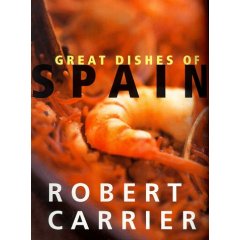 I'm not sure how Rafa got this book. He must have gotten it some time while living in Liverpool -- he must have been homesick. That would be the only reason why he would buy a book about Spanish cooking authored by a non-Spaniard. Desperate times calls for desperate measures.

I had never cooked from this book, but it did have a recipe for the tortilla, so I thought 'why not?'. I, after all, had a waxy potato to use and just enough eggs to make a modest and small tortilla.

So, I fried a small onion, chopped, with the waxy potato in a little bit of light olive oil. While this was frying and getting soft and caramelized, I beat about three eggs with about a tablespoon of water. 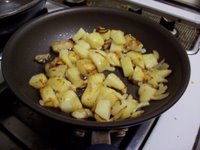 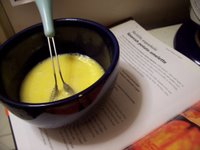 Once the potatoes and onions were soft enough, I removed them from the pan and added them to the eggs, with some salt and pepper. Then, a bit more olive oil was added to the hot pan, and the whole mixture went back in.

The flipping part was the most challenging as usually that is relegated to Rafa -- he is a lot more dexterous, good thing I'm not the nurse! In the end my tortilla was done to perfection and extremely flavorful, but my inept ability to friggin' flip an omelette made it look, as it would be called in the 'hood, busted! But it was delicious so who friggin' cares? 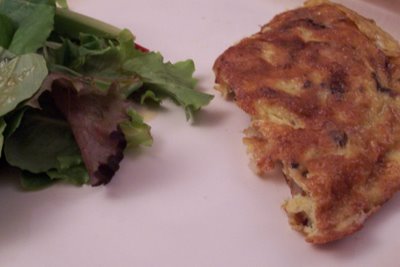 Ooh, almost forgot, I decided to pair the omelette with a nice and pungent salad. It's just some mixed leaves with a sherry vinaigrette. I finally got to use this awesome sherry vinegar I bought at some posh Spanish deli in Soho. The label looks like it means business and looks super authentic -- hold on, let me go read it -- ok, so it is Vinagre De Jerez, "Gran Gusto", Producio y Embotellado Por Bodegas Paez Morilla, S.A., Jerez de la Frontera, España. Fancy, ey? It really cut through the sweetness of the onions and the potatoes and was deeeeelicioso.

When Rafa comes home I'll make him a montadito of tortilla española and some greens with the vinaigrette. Yum yum yummy! The Spaniard better appreciate it!