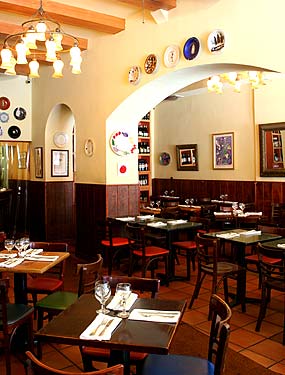 Last Friday, my sister and I took out a good friend to dinner for her birthday. Since Elana was the birthday girl, she chose the place. The place she picked out is known for its lovely and affordable Italian food - Gennaro's (pictured above).
Elana had raved about the portabello and potato tart with goat cheese she once had there. You don't have to say goat cheese twice for me to be all over it! So, we shared that as an appetizer - divine! The 'tart' was base-and-crustless, it was more of a tower of potato and portabello mushrooms with a glorious caramelized crown of goat cheese. This gorgeous creation was seated on top a throne of balsamic-soused sliced beets. Fab!

Then, came the main course. Ever since discovering my foodie-ness, I have taken to listening closely to the 'specials' as I think this is when the chef gets inventive and offers something you may never find anywhere else. The Fall breeze blew ferociously outside on probably the coldest night so far this season, so I was happy to indulge in a pumpkin ravioli in a butter and sage sauce. I'll be on the level here - the chef wasn't being inventive that night. Everybody knows that pumpkins go with sage, bla bla bla. But, I never had a pumpkin ravioli before, so who was I to argue?

I should have known there would be something wrong when the plate came. It was a gorgeous and big round plate, and in the middle, a miniscule 5 or 6 normal-sized ravioli. I don't usually go for the supersize meals, but I figured, this wasn't a fancy place where they call dinner a couple of tiny pieces of steak, a swirly sauce all around the plate, and a parsley sprig on top. This was an Italian place -- I wanted to Mangia! Mangia! -- ya know what I'm saying? Well I didn't let that cloud my view of this meal as I was getting pretty full on the fab ciabatta bread and the tart.

However.... there are times when a cook will go a bit overboard on the seasonings. Basically, my dish tasted like dessert rather than an entree. It was sweet! And not in a pumpkin-is-a-sweet-savory-dish sort of way, my meal was sweet, as in, just pour some chocolate sauce over the thing and don't forget the whipped cream. I'm not sure if it was the sprinkling of nutmeg and cinnamon, or if there was actually sugar on top of the dish, but it was the first time eating something and being surprised how sweet it is. Usually, I'm happy if something is sweeter than I think it is -- but that's when I'm eating dessert. LOL.

I won't not go to this place again, because the menu had lots of things I was drooling over. I like those sorts of places -- where you really can't decide, and it's because EVERYTHING looks so good!
I figure the chef was just very excited about the seasonal flavors -- but he may have gone overboard with it. I'm not a food critic at all, but that meal should have been on the last page of the menu, under Warm Chocolate Cake with Ice Cream!