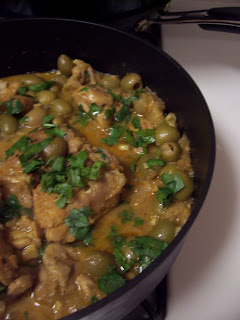 My Nigella friends will know that I am not a big fan of the Barefoot Contessa – more like Snot-tessa. It’s just the way she presents herself – ugh. Or her voice. She sounds so friggin’ uppity, I just can’t like her no matter how I try. One of her sayings that makes me just boil over is when she says, “how easy is that?” And now, to my horror, but not really shock, I saw she just published a book with said blood-curdling title. I guess it’s not as bad as Rachael Ray funking up the English language with Yum-O and EVOO. But in the rare moments I get to watch the Food Network on weekend mornings, I do tune into the BC’s show, because she does make some awesome dishes, and for the most part when I’ve made them, they’ve been pretty successful. And that is saying a lot. In the next blog posts, you’ll catch on to what I mean.


So back to Ina. She had a friend over for one of her shows, and they make a chicken tagine with olives. I just love anything stew-like – meat or vegetables cooking for hours on a low flame – and I just love olives too. I had to make this. I made some minor changes, for instance, for the life of me I couldn’t find a necessary ingredient to Moroccan cooking – preserved lemons. Ok, so I didn’t make the best effort, I admit, by going to the Russian monstrosity also known as Net Cost Market in Brooklyn. They have an entire aisle of preserves and jams. An entire aisle! I know that preserved lemons aren’t really meant to be put on bread, but I took a shot. One that failed! Anyhoo, I made it without the preserved lemons.


The dish was taaaasty! Chicken thighs work so well in this recipe. They really pick up so much flavor, and I did it the easy way by marinating out of the fridge for just a couple of hours. I also went boneless and skinless to make it easier to eat. I hate fiddly food.


In a large bowl, mix the garlic, cumin, ginger, paprika, salt and pepper, 1/2 cup grated onion, and the oil.
Rinse the preserved lemons, and remove the pulp. RESERVE the lemon peel for later use.
Add the lemon pulp to the mixing bowl. Add the chicken. Mix everything together and place in a large plastic bag to marinate overnight in the refrigerator. (Twenty-four hours really gives the chicken the best flavor.)
In a large Dutch oven or casserole, place the chicken and marinade; add the stems of the parsley and cilantro, the rest of the grated onion, the powdered saffron and 1 1/2 cups water. Bring to a boil over high heat, turn down to a simmer and cook, partially covered, for 30 minutes.
Remove the cover, stir the chicken and continue to simmer for another 15 minutes or until the chicken is tender.
Remove the chicken to a serving dish and cover with foil to keep warm. Keep sauce on stove and begin to reduce.
Slice the preserved lemon peel into thin slices and add to the sauce along with the olives, parsley and cilantro. Reduce until the sauce is just a little thick. This shouldn't take more than 5 minutes at most.
Uncover the chicken and remove the skin from the chicken. (It doesn't look pretty and who needs the extra fat.) Pour sauce over chicken and serve.