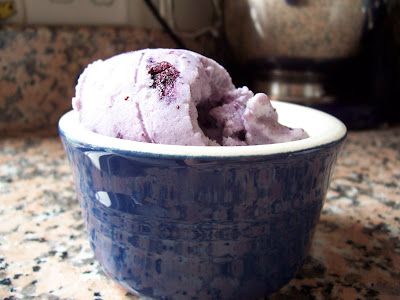 We had a family gathering a few nights ago - for my birthday - and in the funny conversations that often ensue when talking to a four year-old, I discovered the existence of a wildberry. Liam was having me guess what flavor popsicle he had the other day. It was purple, it was sweet, it could be a candy too... Not grape, not blueberry, not blackberry. Wildberry! I am not sure if wildberry is an official berry, but it got me thinking ice cream and berries.
I had some strawberries and blueberries that needed to be used up. I 'jammed' them by mixing them up with about 1/2 cup of sugar on a low heat, and boiling them down until the blueberries starting bursting and the strawberries got nice and soft. I thought about pureeing the mixture, but I wanted to keep the consistency of the berries.
I let this mixture cool in the fridge all day, and then in the evening, mixed it up with a cup of half-n-half and a cup of whole milk. I added about a 1/4 cup of honey for added sweetness, knowing that once frozen, the ice cream would be less sweet than it was as a batter.
The cold batter went into the ice cream machine -- 20 minutes until soft serve consistency, and then in the freezer it went. I would have left it in the machine for another few minutes, but I was worried about it overflowing as I think I had way too much mixture in there. Next time, I would halve the berries and liquids.
Yesterday, the ice cream had ripened and was ready to eat! It was delicious with lovely hints of berries and honey. Just the right sweetness... Nothing like 'wildberry' homemade ice cream! And it was purple, and could be eaten instead of candy. :)

Hi Ilana, I haven't been past in ages. Happy belated birthday, and you've changed your site name, like it!