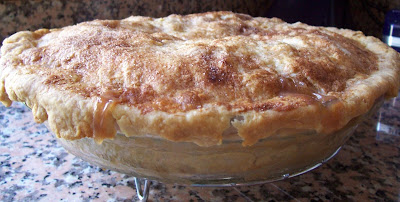 I think the above is one of the stupidest expressions ever. Pie is not easy. That is, making pie is not easy. Ok, maybe some pies are easy, but apple pie isn't. Because it won't taste good unless the crust is from scratch, and of course, you can't get away with pre-peeled, frozen apples. You got peel those apples. Core them. Then slice them. Not easy. At least not for a klutz like me.
But when my friend Rosa brought to work a bag full of Granny Smiths, I agreed to make apple pie with them, because it's fall, and it's apple pie time. As much as I love summer, I just love that first crisp air, the idea of leaves changing, of people leaving their urban environments, getting into nature, picking apples. Eating apple pie is just an extension of that, and if I didn't take part of the laborsome task of picking apples, the least I could do was do something with them. So apple pie for the office it was.
I turned to my bible of baking -- the good people at King Arthur Flour. They have two distinct apple pie recipes. One is called Best, the other, Favorite. You can't really go wrong, can you? I picked the 'Favorite' one, because I couldn't be bothered to get apple cider. The only additional ingredient I didn't have already was, quite surprisingly, the flour. 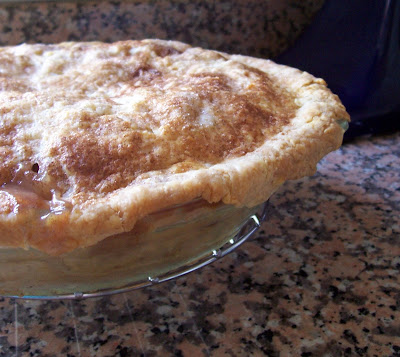 Making the pastry took ages, because I decided to use my hands, rather than the Kitchenaid. Peeling the apples took FOREVER. I once went to pick up Chinese food, and as I was waiting to get my order, the owner of the take out was peeling an apple in front of me. With just the use of his hands and a paring knife, he peeled the entire apple into one long curly strip. I'm so impressed with people who have that ability. I did much better than I usually do, with a vegetable peeler, but it still took FOREVER.
But the result was fabulous, and that's what really matters. The apples were perfectly baked in the sweet cream custard that was formed with the combination of vanilla and half n half. The crust was perfection. EVERYONE from work really loved it, even the people that admitted they are not really pie people. Some had their slices warm with vanilla ice cream I had bought and brought in.
Here is the recipe, because I really think, if you have the time, do make this. So worth it!
Sue’s Favorite Apple Pie -- King Arthur Flour Baking Company
This apple pie isn’t one that’ll make you sit up and take notice. Instead, it’ll invite you to snuggle into your favorite chair, heave a comfortable sigh, and enjoy bite after bite of this perfectly simple pie. The spices in the filling are understated, rather than overwhelming, and allow the flavor of vanilla to shine through. Meanwhile, the vanilla is pairing with the cream to give an impression of ice cream inside the pie, mirroring the scoop of vanilla you may have piled on top.
1 recipe King Arthur's Pie Crust
Filling
2 tablespoons (3/8 ounce) unbleached all-purpose flour
3/4 to 1 cup (5 1/2 to 7 1/4 ounces) sugar, to taste, depending on the tartness of the apples
1/4 teaspoon nutmeg OR ground cardamom
1/2 teaspoon cinnamon
1/4 teaspoon salt
4 to 5 cups (about 1 1/2-2 pounds) cored, peeled and diced apples (Granny Smith and/or Cortland are our favorites)
1 tablespoon vanilla
2/3 cup (5 3/8 ounces) half-and-half, light cream, or heavy cream, your choice
Topping
2 teaspoons sugar mixed with 1/8 teaspoon cinnamon
Crust: Roll one piece of the pie crust out to about 13 inches in diameter, and carefully transfer it to a 9-inch pie pan (a giant spatula works well here). Fold the edges under.
Filling: In a large bowl, whisk together the flour, the sugar, spices and salt. Add the apples (cut in about 1/2-inch dice), and toss to combine thoroughly. Add the vanilla and cream, and stir well. Spoon the filling into the crust. Roll the second crust to a diameter of about 10 to 11 inches, lay it atop the filling, and crimp to seal.
Baking: Bake the pie in a preheated 450°F oven for 15 minutes, then reduce the heat to 350°F, and bake for an additional 40 to 50 minutes, until the top is medium-brown and the juices are clear and bubbly. If the crust appears to be browning too quickly, cover it with a pie crust shield, or strips of aluminum foil.
Note: If you’re using a light or shiny pie pan rather than a dark one, be sure to bake the pie for at least 50 minutes, to ensure that the bottom crust is done. Yield: one 9-inch pie, 8 servings.