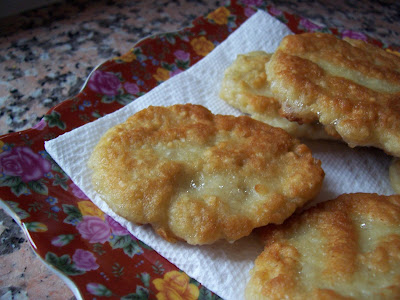 Do you remember those vintage cartoons, where one of the characters, was it Bugs Bunny??, gets so hungry that he starts imagining his friend's head is a roasted turkey, with all the trimmings? That is the phenomenon, sort of, that I face every Passover. I want bread, I need bread, I would kill for bread, even though bread is not something I eat all that often for the other 357 days of the year. Suddenly, Pizza Hut commercials pop up everywhere.

But this year has been different. I think that instead of eating items that are supposed to substitute bread, I am eating stuff that has nothing to do with bread at all. Good food that stands alone. And it helps that I adopted the Sephardic view of Passover, eating lots of beans and rice to relieve those hunger pangs. Ok, so I'm not Sephardic, but I did marry someone from Spain. That counts, right? Even though his people were probably kicking my people out 500 years ago??

There is one exception when it comes to Passover cooking that I love love love. My mom's matzah latkes. Basically fat pancakes made of matza meal, water, egg and salt. Simple. But, I never attempted it on my own. This week, I fried up a couple of batches, and I'm happy to say they turned out DELICIOUS. I love the texture of latkes. The matza meal and egg provides a crunchy crust, but the inside is so dense and moist, yum!

I also made Nigella's Chocolate Macaroons, from Nigella Express, for Seder night last Saturday. They were a big hit as well, and I discovered my blender does an awesome of grinding flaked almonds - an even better job than my small food processor. 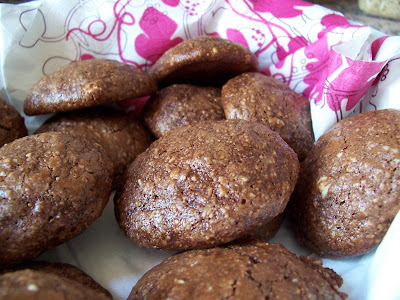 Even though Passover has been easier than normal this time around, I have to admit a large pie of pizza is extremely tempting at the finish line. On my mind to bake next are some lovely, buttery brioches that I will cut into two, smear with some nutella, and top with gorgeous and rich chocolate ice cream. YUM!

Oh wait, I think I spelled that wrong... :S Sorry about that..

I have been thinking of giving those chocolate macaroons a go - yours look great!
xx

I was looking at the chocolate pudding and these cookies this afternoon! They look lovely.

Have always wanted to try proper latkes as well, but I don't want to make them until I've tasted what they should be like iykwim!

Yum, I love these macarooons. They are quite addictive, don't you think? :)